Growing up in Luxembourg, religion had hardly played a role in my life. Although I was baptised because my grandmother wanted me to be, I was by no means brought up in a religious manner – neither in my family nor at school. Religion as a set of beliefs and practices was foreign to me, even though my everyday life in Catholic Luxembourg was nonetheless influenced by religious holidays and traditions.

After graduating from secondary school, I did not know what I wanted to study. A number of different circumstances finally led me to decide to study Comparative Cultural and Religious Studies. Without knowing what to expect, I threw myself into it. The subject of Religious Studies fascinated me right from the start. One of the reasons was probably that religion almost seemed like something “exotic” to me – and something “exotic”, however problematic the term might be, necessarily arouses interest. What does religion do to people? Why do some people believe and others not? What role does religion play in our European society today? How and why is religion changing?

These questions, which were preoccupying me since my first undergraduate year, can now finally be thoroughly addressed in my current PhD project. In it, I am investigating how religiosity changes in the course of a lifetime and the reasons behind it. For some years now, my research focus has been directed towards my home country, Luxembourg. Especially since 2015 the Grand Duchy, which lies in the middle of Europe, has gone through an intense period of secularisation. The State and their religious communities are increasingly distancing themselves from each other. Furthermore and akin many other European countries, a decrease in church attendance can also be observed. Another outstanding characteristic of Luxembourg is the comparatively high proportion of foreign inhabitants who comprise around half of Luxembourg’s population (about 626.000 people). This leads to a sustained pluralisation not only at the level of nationalities and languages, but also at the level of culture and religion. As a result of the previously mentioned phenomena, the Catholic Church is gradually losing its dominant and privileged position in Luxembourgish society – at least that is what the voices at macro level say.

In my research project, I aim to dig into the country’s micro level of religious socialisation for the first time, i.e. to the level of the Luxembourg citizens, and to closely analyse how religiosity and the attitude towards religion is transformed in various biographical narratives. In addition, my research interest is motivated by very personal questions that I have been asking myself for years: why are some people religious and others not? Why am I not religious? Why are many of my Luxembourgish friends not religious? Why do I so often have to face uncomprehending and questioning reactions in Luxembourg when I talk about my subject – the study of religion? Why does the subject of religion often seem to be associated with negative feelings?

For my research project I have decided to conduct narrative interviews with people born in Luxembourg and aged between 60 and 69. This is a constantly growing age group that is therefore increasingly influential in our society. Despite this fact, there are almost no studies so far that deal with this cohort. Research either focuses on the youth or on elderly. My project thus focuses on the following questions: how do perceptions of religiosity transform in the individual life course today? What are the reasons for these transformation processes? How do changes in Luxembourgish society impact the entire process? To sum it up: How do social developments influence (religious) biographies?

My initial hypotheses are based on two core assumptions, the first being that religiosity is not just a phenomenon of the purely subjective inner world of an individual, but is rather also influenced by the social environment and social developments. Secondly, I assume that each individual’s relationship to religion or religiosity is changing in the course of a lifetime. Religiosity is thus conceived of as something dynamic and fluid rather than something static.

Although I am still at the very beginning of my research, I can make the preliminary assessment that my first interviews support these two hypotheses. In these cases, religiosity is discussed as something highly individual and changeable. Furthermore, at this point I can make the hypothesis that the (religious) socialisation of each individual’s childhood and adolescence plays a central role in the formation and development of the adult’s later religiosity. What’s more, social encounters seem to be of central importance – and this does not only mean encounters with religious representatives. Even though it remains to be seen if these hypotheses are tenable and if they apply to other cases, it nevertheless gives a first impression of my ongoing project.

Finally, my research approach and this short contribution here make it clear that I have a sociologically shaped perspective on religion and understand religion primarily as social practice. I wish to grasp how religion shapes an individual and, in a next step, society as a whole. Even if it appears from the outside that religiosity is on the decline on the state level, this does not necessarily mean that it is disappearing altogether. It is conceivable that only its form and visibility have changed. Religion thus is and remains an aspect of society that must be taken seriously in the analysis of society. It can bring people together, but it can equally also drive them apart. 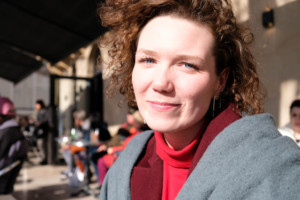 Liz Lambert is a Research Scientist at the Luxembourg School of Religion & Society and PhD candidate at the Institute for the Study of Religion and Religious Education at the University of Bremen. In her project, she uses biographic research to question how and why religiosity changes in the course of a lifetime.