The Catholic Church in the Philippines commemorates this year’s 500th anniversary of the first Baptism administered in the country. The theme for this celebration is “gifted to give,” which is inspired by the Gospel according to Matthew, which says: “without cost, you have received; without cost, you are to give” (Mt 10:8). Faith is a gift. And this gift of faith should be proclaimed and shared with others. So, for Filipino Christians, this year’s commemoration is a celebration of thanksgiving and, at the same time, a call to reflection on the love and grace of God that sustains the faith. It is a call to renewal and conversion.

As a Filipino living and working in Austria, I am aware that, although it is the same Christian faith, the way I express it and put life into it is different from those around me. It is because faith is a cultural and social practice. It is rooted in a culture, and that culture is shaped by faith. Hence, it differs in its expressions. This difference, however, is both a challenge and an opportunity. Thus, before going further, it is good to recall very shortly how the Christian faith came to the Philippines five hundred years ago.

Ferdinand Magellan, a Portuguese navigator, led a European expedition commissioned by the King of Spain, whose motive was mainly political. At the time, Spain sought a new route to the so-called “Spice Islands” in the Moluccas, an island group in Indonesia located between Sulawesi and New Guinea. Instead of reaching the envisioned islands, Magellan and his people landed on the southern part of the Philippine archipelago on March 16, 1521. When the group arrived on the island of Cebu, the local chieftain there and his wife, together with hundreds of their subjects, were baptized by Father Pedro Valderrama, the chaplain of the expedition. In those first baptisms, the seed of the Catholic faith has been sown into the hearts of the Filipino people. That very moment, as Archbishop Charles Brown, the present Apostolic Nuncio to the Philippines, would describe it, was “the beginning of the evangelization of the Philippine Islands, the arrival of the light of Christ, the arrival of the Gospel of salvation in these islands.” In other words, as Bishop Pablo Virgilio David asserted, what is being celebrated “is not colonialism but the Christian faith that the indigenous Filipinos welcomed as a gift.„

Christianity is a faith that began on Asian soil. In his Apostolic Exhortation Ecclesia in Asia (1999), the late Pope John Paul II once wrote: “It was in fact in Asia that God revealed and fulfilled his saving purpose from the beginning” by sending “his only-begotten Son, Jesus Christ the Saviour, who took flesh as an Asian.” The Christian faith was then spread into the neighboring Asian regions, Europe, and eventually throughout the world. And then, in the 16th century, the same faith was brought again to Asia, to the islands of the Philippines, through European explorers, adventurers, and colonizers, accompanied by missionaries. And now, after five hundred years, it is the same faith that is carried throughout the world, indeed not by colonizers but by Filipino working individuals looking for greener pastures to support their families left at home. They bring with them their Christian faith, nurture it in their respective faith communities abroad. Nowadays, there are more than ten million Filipino migrants who are living in almost one hundred countries in the world. For example, in most parts of Europe, Filipino faith-based communities are making a positive impact on the local churches they attend. Their presence contributes in one way or the other to the life of their respective ecclesial communities. Therefore, it is interesting to see that, as Archbishop Brown has stated, “the faith that began in Asia was transported to this part of Asia by Europeans and now is being re-transported back to Europe and other places around the world by Filipinos.” This aspect, Archbishop Brown continues, would suggest the “universality of the Catholic faith.” In other words, the Catholic faith “cannot be identified with any single culture; it is rather the life-giving truth of God that can be embraced by any culture and, with time, will transform that culture so that – as in the Philippines – that culture will give its own particular expression to the Catholic faith.” This is also true in regard to other religious traditions. Hence, religious pluralism has always been the norm.

One may ask why the indigenous Filipinos accepted the Christian faith since they have an indigenous religion. Was it because of fear? Were they forced to be baptized by the missionaries? What made them decide to become Christians? While it is possible that fear and greed could have moved them to become Christians, Fides del Castillo, Professor of Theology at De La Salle University, argues “that these are not enough to grow and sustain the Catholic faith. Hence, the successful Christianization of the Philippines could have been facilitated by the indigenous culture.”

The challenge nowadays is: how can one’s faith be lived out in a particular culture and be nurtured there when, in the first place, that culture fails to recognize its importance and significance? As Christians, for example, what should be our attitude nowadays in giving witness to our Christian faith? Since we live in a religiously pluralistic world, how do we perceive the adherents of other religious traditions? Do we see other religious traditions as authentic ways of God’s self-communication to his peoples?

Religious and cultural plurality is the mark of our present time. We experience this reality every day in our neighborhood, in our schools, in our workplaces, and our societies. In the context of religious pluralism, interreligious dialogue has become of primary importance for the coexistence of different groups and individuals. If this dialogue is to be fruitful, we Christians must continue to do our share by maintaining a positive evaluation and appreciation of the manifold religious traditions.

We have witnessed some terrifying events in recent times that have shaken societies and the world and continue to shake humankind to the core. Our present world seems incapable of maintaining peace between peoples and nations. On the other hand, religions, which should be an element leading to universal peace, have often been weaponised throughout human history to cause and promote conflict and sow terror and wars between peoples and nations. The late theologian Hans Küng once wrote: “There can be no peace among nations without peace among religions. There can be no dialogue between religions without a search for a theological foundation.” It would mean that to ensure peace in the world, a sincere interfaith dialogue, theologically grounded in a positive evaluation of religious traditions, is necessary. This effort, of course, does not end here. Moreover, our willingness and determination to engage in dialogue with our dialogue partners should not be limited only to the realm of interfaith; it should reach out also to those who have no religious affiliations at all, to the non-believers. This group of people claims to have no faith in God and non-religious, but most of them, if not all, have world views and perspectives of reality, the world, and life. Hence, there is a need to listen and converse with them too. I would refer to this area of dialogue as “inter-worldview dialogue” or “dialogue of perspectives.”

Throughout the centuries, we Christians cannot deny that Christianity has often maintained a negative evaluation of other religions, leading to equally negative attitudes toward its members. Aside from the often-hostile attitudes toward members of other religious traditions in the past, one must mention the traditionally negative and derogatory evaluations of their cultural and religious heritage that have spanned across centuries. The claim of being “the only true religion” was ideologically in the axiom “outside the Church there is no salvation.” Such an axiom, rigidly understood, has remained for centuries the official doctrine of the Church as an object of shame. In his Apostolic Letter Tertio Millenio Adveniente (1994), Pope John Paul II proposed to the whole Catholic Church an attitude of penance for the sins of Christians throughout the centuries regarding members of other religions. He wrote: “A painful chapter, to which the sons and daughters of the Church cannot but turn in a spirit of penance, consists in the manifest surrender, especially for some centuries, in methods of intolerance and even violence in the service of truth… At the threshold of the new millennium, Christians must humbly place themselves before the Lord to ask themselves about their responsibility for the evils of our time”.

Aware of the dark side of history Christian mission, we must ask the crucial question: How do we move forward? As a Christian, I am very much convinced that one way to move forward is to reflect more profoundly on the mystery of God’s single universal plan of salvation for the whole of humanity. His will is that “everyone will be saved and come to the knowledge of the truth.” (1 Tim 2:4) Because of this, members of religious traditions, Christianity included, must embrace the importance of interreligious dialogue.

Comparing my experience of interreligious dialogue in the Philippines and Austria, even if these two contexts are different in many ways, I would say that, in principle and, as far as its goals and objective is concerned, it points to shared paths leading to a common horizon.

To engage in dialogue with “Others” is to live with them in harmony while respecting the existing diversity. The more we dialogue with our partners, the more we get to know them, and the more we know them, the deeper we know ourselves, too. This self-knowledge leads to the knowledge of God. In other words, interreligious dialogue is, in nature, not only anthropological but also theological. The Christian understanding of dialogue is very much rooted in the very life of the Trinity itself. Dialogue has a trinitarian foundation, the threefold foundation based on the common origin and the single destiny of humankind in God, universal salvation in Jesus Christ, and the active presence of the Holy Spirit. And this trinitarian foundation of interreligious dialogue renews the universal call to collaboration. In this dialogue of salvation, Christians and members of other religions and even those who are religiously unaffiliated are called to collaborate in God’s grace, who is universally present and active in the world, for the good of humanity.

In this spirit of collaboration, I would like to express my gratitude for the opportunity to be part of the 2020-21 programme of the DialoguePerspectives. Thank you for giving us participants the platform to reflect the religious, political and societal plurality of the European society and challenge us to open ourselves and share our experiences, worldviews, and perspectives. In the process, I realized that my participation became more meaningful because I joined the programme with a particular perspective or view rooted in my Christian faith, which I am also called to give witness to through dialogue. 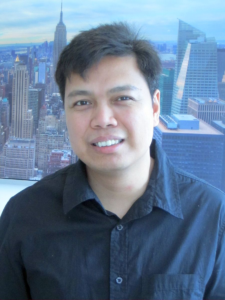 Cirilo Boloron Jr, born in the Philippines, is now based in Vienna, Austria. He is currently working in the pastoral for the Archdiocese of Vienna. Before moving to Austria, he earned his bachelor’s degree in Philosophy in Christ the King Seminary, Quezon City, and a master’s degree in theology at the Divine Word School of Theology, Tagaytay City. He holds a doctoral degree in theology from the University of Vienna, Austria. His research focuses on the Christian theology of religious pluralism.