What we celebrate and why: The Jewish festival of Purim

Purim commemorates the saving of the Persian Jews described in the biblical Book of Esther (Megillat Esther) in the fourth century B.C.E. During the reign of the Persian king Achashverosh and his Jewish wife Esther, Haman, the king’s highest official, planned to kill all the Jews in the kingdom. Esther, however, thwarted Haman’s plan. With support from her uncle Mordecai, she interceded with the king on behalf of her people and persuaded him to grant the Jews the right to self-defence by decree. The Jews successfully defended themselves and Haman’s plan failed. The name Purim is derived from the word “pur” (plural Purim), which means “lot” (i.e., “to draw a lot”), because of the lots that Haman drew to determine the day of the Jews’ destruction.

Synagogue congregations mark the occasion with a service that is usually not overly serious. A very widespread tradition in the synagogue is to accompany every mention of the villain Haman with a deafening noise of jangling and rattling during the reading of Megillat Esther. The day before Purim is called the “Fast of Esther” and commemorates Esther and her people fasting while begging G’d for salvation from Haman’s decree.

Purim is celebrated on the 14th or 15th day of the Jewish month of Adar in Spring.

Purim, the happiest day of the year! This statement should not only be understood subjectively, but also corresponds to the Jewish tradition of this festival. Purim, the holiday of the lots, is a celebration of the Jewish Queen Esther saving the Jews from the evil vizier of the Persian King Achashverosh, named Haman (boo).

Here are some of the reasons why Purim is my favourite holiday. The Megillat Esther is often read as a feminist text, with strong women and heroines. With the support of her uncle Mordecai, Esther, a Jewess, becomes Queen of Persia, though she must keep her identity secret for her own protection. When the evil Haman (boo) draws lots to set the date for the execution of all the Jews in the Persian Empire, Esther reveals her true identity as a Jew to her husband, the king, and saves the Jewish people! Girl power! 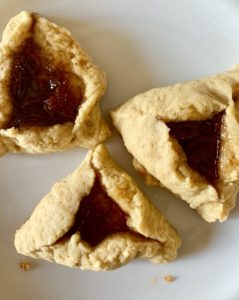 On Purim, there are some mitzvot – duties – to ensure this day is celebrated properly!

One mitzva is to donate money to those in need so that all members of the community can celebrate together. We also prepare small baskets filled with food and treats for friends and relatives. This mitzva is called Mishloach Manot. In my community in the US, it was typical to prepare elaborate gifts with yearly themes and distribute them before Purim. Finally, we have a festive meal that includes drinking. Tradition even says to drink until you can no longer tell Mordecai from Haman. For this reason, Purim is a holiday on which it is typical to have big parties, whether on the streets of Tel Aviv or in a club in Berlin. Many children and adults alike dress up, for example as Queen Esther or Mordecai. And they bake triangular biscuits called hamantaschen. These biscuits are shaped to resemble the ears of the evil Haman (boo).

Liora Jaffe studied sociology and law at the University of California at Berkeley and has lived in Germany since 2013. After a fellowship at an aid organisation, she is now pursuing a master’s degree in Interdisciplinary Public and Nonprofit Studies. Liora Jaffe was a scholarship holder of the Ernst Ludwig Ehrlich Studienwerk and a participant in Dialogueperspectives. Liora is also involved in “Studentim”, a Jewish student initiative in Berlin.