From 3-4 June 2021, the first of two parts of the DialoguePerspectives European Leadership Workshop took place. It marked the workshop’s inaugural outing. The format brings together former and current programme participants who are particularly committed to and experienced in interreligious/worldview dialogue. The workshop participants are grappling with the task of transferring the central theses and demands developed over the years by DialoguePerspectives into the political process. The concrete aim of this workshop is to prepare policy papers for the European political level. For this purpose, the first part of the workshop brought together almost 20 participants within the digital space in order to learn the most important principles for creating policy papers, which are central to the political process, in intensive methodological sessions. This work was flanked by three lectures by trusted experts in the field of policy advocacy.

Following the greeting by DialoguePerspectives programme director Johanna Korneli and an introduction by DialoguePerspectives project officer and workshop coordinator Gil Shohat, the participants of this year’s workshop introduced themselves and their different areas of work. The immense diversity and expertise of the participants was immediately clear. It provided a good foundation for working on the various policy paper topics: strengthening gender equality and LGBTQI rights, expanding interreligious/worldview dialogue in the European space, combating racism and anti-Semitism in the context of educational work and remembrance culture, and strengthening European civil society by empowering marginalised groups in the European political process.

Next, Jo Frank, director of development at the Leo Baeck Foundation as well as the DialoguePerspectives project manager, spoke about the importance of working within the “engine room” of politics and how important contacts among civil servants are for influencing political action. After all, such networks last long beyond individual election cycles. Frank’s remarks were echoed by Dr Nicolas Bouchet, policy editor and fellow at the German Marshall Fund. In his introductory talk on policy paper writing, he too pointed out the need to combine clear, concise messaging with the right recipients for those messages.

After the lunch break, the participants were welcomed by Nikolaus von Peter, policy officer for migration, internal security, digitalisation, justice, and competition policy at the German Representation to the EU Commission. In his presentation, Mr von Peter showed the inner workings of the EU “engine room” and gave the participants important hints on the different levels that the future policy paper authors could seek to influence. He also emphasised several times the importance of the “working level” for policy work in the EU and invited the participants to further discussion over the course of the workshop.

The first day of the workshop concluded with a one-hour working session for the working groups on gender equality and LGBTQI rights and on the expansion of interreligious/worldview dialogue in the European space. The members of the two groups worked with Nicolas Bouchet on the first main topics of their planned policy paper, structuring them using a specially drafted working document. 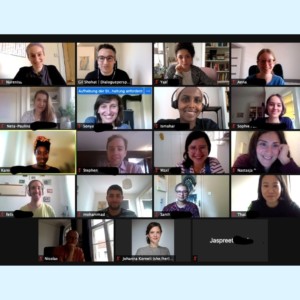 Day 2 of the workshop began with a presentation by Karen Taylor, chair of the European Network Against Racism (ENAR). Taylor emphasised the importance of good networking at the European political level in Brussels in order to be able to set policy accents when a window of opportunity opens. As an example, she mentioned the EU Action Plan against Racism 2020-25, adopted by the EU last year, in which ENAR was involved thanks to her many years of political work.

The afternoon, like that of the previous day, included phases of intensive small group work. This time, policy paper expert Bouchet worked with the members of the other two gropus concentrating on combating racism and anti-Semitism in the context of educational work and remembrance culture, and on strengthening European civil society by empowering marginalised groups in the European political process. Together they laid a solid foundation for further work in the coming months.

The participants of the European Leadership Workshop, accompanied by Gil Shohat, will now work intensively on the documents they have started. Their work will continue until the second part of the workshop, to be held at the end of October in the UK, giving them an opportunity to get to know each other better in the coming months. In this process, it will be important for them to determine the status of the issues they are dealing with at the EU level, using this information to work out concrete goals and proposals for improving European policy on these issues.

We are looking forward to this process and to the production of the first policy papers under the auspices of DialoguePerspectives!