At the long awaited beginning of our second year as a European programme funded by the German Foreign Office (Auswärtiges Amt), we welcomed 75 participants to our autumn seminar in Potsdam titled “Towards a pluralistic European culture of remembrance: navigating the narratives, memories and histories that shape European communities”. The aim was a diversification of European remembrance cultures, which is a prerequisite for the recognition of plural European societies.

Our seminar from 6-10 October 2021 was thus dedicated to the recognition, strengthening and rendering of the inherent, yet partly invisible diversity of European moments of remembrance. Furthermore, the seminar, as always, left plenty of room for the participants to get to know each other in private discussions as well as offered them the opportunity to get to know the core DialoguePerspectives team as well as our external colleagues who collaborate with us on a regular basis during our programme events.

The seminar began on the afternoon of 6 October with a general introduction by DialoguePerspectives programme managers Rachel de Boor and Gil Shohat, who greeted the participants in Potsdam and online by introducing and discussing the foundational assumptions of the DialoguePerspectives programme as well as the guiding theme of this seminar: the re-navigation and re-shaping of European remembrance cultures.

After dinner containing vegan and vegetarian dishes (as all nutritious meals offered by our hosting hotel), the group gathered for the first round of the DialogueCafé, led by our team member Maximiliane Linde. In this module, the participants were able to actively grapple with foundational assumptions of our programme via the “WorldCafé” format, thus sitting around a table themed by a specific aspect of DialoguePerspectives work and discussing the participants’ individual perceptions of these different assumptions.

The second day of the seminar (7 October) started with two intriguing spiritual morning impulses by two of our participant. It was followed by two time slots for dedicated to the hotly anticipated workshops conducted by our five workshop leaders: Melina Borčak (workshop title: Incels, Conspiracists, Neonazis: How the genocide against Bosnian Muslims inspires terrorists and extremists worldwide – and how we can change this), Professor Frederek Musall (A picture says more than thousand words! Pop culture and the culture of memory), Dr Cátia Severino (“I’m now in the mirror and where am I?” A reflection on the memory culture in Portugal), Neta-Paulina Wagner (A geography of memory – let’s reclaim space), and Dr Alexander Graeff  (Erinnern heißt Erfinden, oder: Wie neu sind die neuen Narrative?).

The late afternoon gave the new cohort the opportunity to listen to an input presentation by the Director of Development of the Leo Baeck Foundation and project leader of DialoguePerspectives, Jo Frank. He outlined different aspects of the politics of memory, particularly the power of silence when it comes to answering the questions who remembers what, where and when and the necessity of implementing the core ideals of the DialoguePerspectives participants in the political realm if we wish to see significant change in these fields.

The first full seminar day was concluded by a reflection session, led by team member Kristina Schneider. In this session, the participants took time to think about their needs and expectations for this seminar along the following guiding questions: “To feel comfortable in the place and group, I need…”, “For me it’s important to talk about…”, and “I’ll leave this seminar with a good feeling if…”. The anonymised answers of the participants served as first orientation for the DialoguePerspectives team and thus as part of the programme’s crucial work with the feedback of the cohort.

Day 3 (8 October) started with a DialogueTrip of the entire team and participants to the Alexander Haus on the border between Potsdam and Berlin, a place that embodies the ruptures and diverse heritages of memory of the 20th century like hardly any other place in the region. Initially the summer home of the Jewish Alexander family, it was “Aryanised” by Nazi Germany in the 1930s. In the years of the German Democratic Republic (GDR), it was leased by a local family. After the fall of the Berlin Wall, which ran through the garden of the property, the house came back via many detours into the hands of the Harding (formerly Alexander) family, who meanwhile lived in Great Britain. Since 2015, the house has been transformed piece by piece into a place of remembrance and education and into a place for interreligious-worldview dialogue where groups can retreat for seminars or workshops. Thus, this place was pre-destined for an excursion of our participants in order to experience the physical manifestation of this unique site at the interplay of past, present and future. The participants were welcomed by Silke Radosh-Hinder (Leo Baeck Foundation) and Berlind Wagner (Alexander Haus e.V.), after which they received guided tours of the site and the vicinity.

After an intermediate workshop session, the afternoon was concluded by an intriguing panel discussion comprised of four members from the DialoguePerspectives project tackling remembrance culture from a pluralistic perspective, the Coalition for Pluralistic Public Discourse (CPPD): Nadja Ofuatey-Alazard, Dr Noa K. Ha, Mohamed Amjahid, and Professor Frederek Musall (chair). The four panelists debated the current state of German discourses on remembrance in the light of the ongoing debates on the necessity of facing its colonial past more intensely in order to understand inequalities and exclusions of the present. Furthermore, the panelists answered the participants questions on how to transfer insights and debates into concrete action. A common thread that connected their questions (as well as many discussions during the seminar) was whether structural change was most probable from the inside or the outside of the structures themselves.

Friday evening’s are traditionally the moment for the Kabbalat Shabbat celebration. Our new religious-worldview advisor Nina Rosen coordinated this service, as well as the Havdalah ceremony at the end of Shabbat, together with our Jewish participants, thus sharing the central elements of Jewish religious weekly practice with participants of many faiths and none.

The rest of the evening was dedicated to reciprocal learning : our team member Maximiliane Linde, who coordinates networking and communication in this programme year, offered the participants a vital space to get connected on their various fields of engagement.

The aspect of reciprocal learning and reflection was also central to our fourth seminar day on Saturday (9 October): it was opened by a Jewish-Muslim-Christian trialogical conversation on rituals of remembrance from these three perspectives, brought to us by Pastor Dr Kerstin Söderblom, Rabbi Maximilian Feldhake as well as Dr Ayşe Başol.

The rest of the day was spent with further intensive workshop phases as well as a personal reflection of the participants on objects of memory that were particularly meaningful to them. The discussion that developed in small groups sharpened their consciousness regarding the relationship between personal and collective memories in our European societies as well as further deepened trust relationships within the group that will spend the following programme year together.

After the traditional Havdalah ceremony, the participants completed their last full day of the autumn seminar by means of a closing panel in the plenary, where common threads from the five conducted workshops were brought together. In the so-called “fish bowl” format, participants and team members discussed future options for the dissemination of the insights gained in Potsdam into the wider world, thereby underscoring the the necessity of keeping up the spirit of thinking against the grain and making their voices heard collectively in the strive for reframing the present by rethinking the past. This last intensive seminar day was then concluded by our #socialsaturday.

Before the seminar ended on Sunday (10 October), the participants gathered for a Christian ecumenical service, planned and coordinated by our Christian religious-worldview advisor at Potsdam, Philine Lewek. This very musical and joyful worship was then followed by our last module of the seminar: the signatory plenary feedback session of the programme. Numerous participants shared how overwhelmed and empowered they felt by these last four days, specifically underlining the singularity of DialoguePerspectives approach in bringing together participants of manifold backgrounds and traditions together in an effort to reshape European realities. Nevertheless, participants also offered invaluable critical feedback for the team to consider for our next events.

The DialoguePerspectives Berlin team is now itself digesting the intensive five seminar days. Johanna Korneli, Rachel de Boor and Gil Shohat concluded the seminar by outlining the various outlets for the participants to share their work via the programme’s network, for example the blogseries “This Is Us”, the podcast series “(Re-)Shaping Europe” or the opportunity to organize events with financial support of DialoguePerspectives.

We look forward to seeing everyone in Luxembourg in March 2022, while staying in touch in the digital realm until then. Stay tuned!

impressions from our seminar: 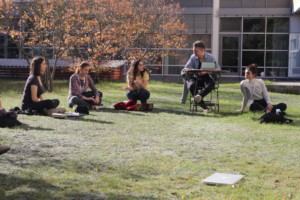 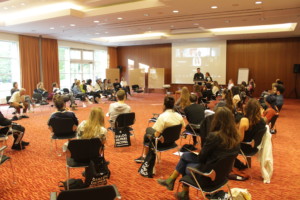 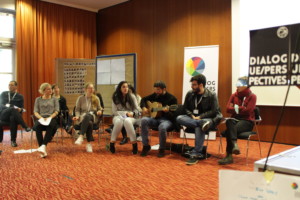