From 12 to 16 October 2022, we were delighted to welcome 75 participants from 20 European countries and a great diversity of European contexts, each with their own religious identity or secular worldview, to our Autumn Seminar 2022. It was the first seminar of our new programme year, held this year in Bonn, Germany.
Titled “Towards European Diversity Competence. Tackling Questions of Difference and Cohesion in the Context of Religions, Worldviews, and Society”, the seminar focussed on the potentials for, and opportunities offered by, a plural and further pluralising European society. It tackled the question of how we can develop new forms of societal cohesion that recognise and value religious, worldview, and other diverse societal difference. A variety of formats and methods – workshops, panel discussions, reflection formats, religious-worldview praxis, and morning spaces – allowed the participants to get to know each other while facilitating intensive shared work on the central questions of the seminar.

Over the course of five intensive days of work and discussion, of encounters and exchange, this year’s participants came together as a group, began to build relationships and networks, and to formulate goals and an agenda for their shared work and action for the programme year.

On the afternoon of 12 October, the programme managers Rachel de Boor and Henri Vogel greeted the participants with an introduction to the DialoguePerspectives programme, in general, and to the guiding questions of the seminar in particular. Programme leader Johanna Korneli used her greeting to highlight the current need for plurality and diversity competence, especially in light of the rise of the new right in Europe, the threat to people marked as “others”, and also in view of Europe’s increasingly closed-off external borders. This situation must, in her view, be countered by solidarity in action, taking seriously the opportunities of and possibilities for European plurality.

That evening, the seminar’s first DialogueCafé took place – a format in which the participants came together in a series of changing constellations at seven different tables. Guided through the format by team member Kristina Schneider and the help of Maximiliane Linde and İrem Çörekçi, the participants dove into the conceptual foundations of DialoguePerspectives as well as a few preparatory questions for the new programme year. This allowed the participants to have deep discussions for the first time, getting to know each other better while discussing such questions as, for example, what skills and abilities are needed for successful dialogue, or where they see themselves as situated within Europe.

The second day of the seminar began with preparations for the religious-worldview praxis, a central element of the seminar. The participants were invited to get involved in preparing the Jum’ah prayer, the Kabbalat Shabbat and Havdalah, the Alevi input, or the Christian ecumenical service. The participants who were not involved in those groups had the opportunity – with Henri Vogel and Maximiliane Linde – to explore the possibilities for offering a secular worldview praxis.

Next, the participants came together with Kristina Schneider to formulate a few of their needs, wishes, and expectations of the seminar using the prompts, “For me to feel comfortable in this place and in this group, I need…”, “For me, it is important to speak about…”, and “I can return home from this seminar with a positive feeling if…”. The anonymised answers will serve as an initial orientation for the DialoguePerspectives team in their planning of the seminars to follow. At the same time, this offered the participants an opportunity to come together as a group to compile and appreciate their diverse needs and expectations.

The workshops began in the afternoon. These offered the participants an occasion for intensive learning and exchange in smaller, more intimate group settings led by five experts, each dedicated to further exploring one aspect of the seminar topic. This year, we were pleased to welcome Prof. Dr. Frederek Musall (workshop: Pluralism beyond the Phrase: Challenges & Chances of Narrative Multidirectionality), Santhi Corocoran (workshop: Exploring Culture, Diversity, and Intercultural Competence in Changing Times in Europe: Complexities, Challenges and Potentials), Dr. Cátia Severino (workshop: The Language Barrier: Overcoming Social and Ethnic Linguistic Variation), Whitney Nosakhare (workshop: A Godless State?), and Dr. Alexander Graeff (Workshop: “Classism” in Intersectional Dialogue). Stephanie Kuhnen (workshop: Reconnecting Society, Reorganising Solidarity, Resisting Complicity), had planned to participate but could not attend due to illness.

Following this first round of workshops, Daniel Weber, from our host institution the Gustav-Stresemann-Institut e.V. welcomed the participants and introduced them to the history of the institution and its mission as a site of learning and exchange.

Thursday evening was dedicated to the panel discussion “Diversity Competence – (At least) six perspectives on central fields of society”. Maximiliane Linde served as the moderator, welcoming six guests, including five former DialoguePerspectives participants and one of last year’s workshop leaders. The first, joint portion of the evening saw the guests introduce the plurality aspects from their own areas of expertise: Melina Borčak for journalism and anti-racist media analysis, Josephine Davidoff for the rights of the disabled and neurodiversity, Anja Fahlenkamp for diplomacy and government ministry work, Mohammad Khanjar as an advisor on policy and public relations, Naina Levitan for health, the healthcare system, and sex and gender, and Sonya Quertani for interreligious and Jewish-Muslim dialogue as well as international development cooperation. This was followed by a session in which the participants could seek out the small group on the topic of their choice to learn more in conversation with the guest experts, concluding with a reflection round with the entire group once more.

Friday, as the third day of the seminar, began with five “Morning Spaces” by and for the participants that offered inputs on, e.g., Islamic cemeteries in Europe, morning exercise for body and soul, or astronomy and astrology. This format, like others, had proven itself in the past and offered participants a first space and opportunity to take on responsibility for shaping the contents of the seminar.

The rest of the day was devoted to the workshops. In one session in the morning and two in the afternoon, the participants engaged in intensive work and discussions in small groups.
Before the third session came the time for the Islamic Friday prayer, Jum’ah Mubarak, which was prepared and carried out by one of the four religious-worldview advisors of our seminar, Nour al-Huda Schröter, along with Muslim participants. It allowed the participants the opportunity to get to know and to experience different traditions of the Friday prayer.

In the evening, the participants celebrated Kabbalat Shabbat. The religious-worldview advisor Helene Shani Braun prepared this service and the Havdalah ceremony for the end of Shabbat, with the support of Prof. Dr. Frederek Musall and Jewish participants, thus making central elements of Jewish religious praxis accessible to all the participants.

The participants made use of the rest of the evening for open discussions and a shared Shabbat dinner.

Saturday also began with Morning Spaces, which on this day included inputs on Sukkot, questions of self-forgiveness, and a small experimental space for spontaneous contributions. Kristina Schneider then led the participants through a second, individual and personal reflection round that made use of the identity molecule format, exploring possible personal influences on their lives. The following assessment of these molecules showed the diversity of possible factors that unite the participants as individuals and as a group.

This, and their personal engagement, could be seen in the following midday break, which including a spontaneous input on Quakerism and a Shabbat stroll.

The afternoon featured an exploration of Alevi praxis and spirituality led by the Alevi participants with the religious-worldview advisor Barış Şahin, in which the participants were able to grapple with Alevi poetry and practices of remembrance.

Later in the afternoon, Rachel de Boor, Maximiliane Linde, and Henri Vogel used the first part of the “Diversity Competence in Europe” session to introduce the participants to the various possibilities they have during the further course of the programme year and beyond to both get involved with DialoguePerspectives and to receive support with their own projects. They then reflected on the diversity competence they had gained (as well as what was still lacking) and developed their own ideas for how they might (further) work on these.

Following the Havdalah ceremony in the courtyard of the Gustav-Stresemann-Institut, the participants ended the final full day of the Autumn Seminar by presenting and discussing the results of the small group work with the entire group. These were recorded in writing and will play a role in the rest of the programme year. The day of intensive seminar work came to an end in the informal setting of the now traditional #socialsaturday.

Before the end of the seminar at Sunday midday (16 October), the participants assembled for an ecumenical Christian worship service, which was planned and led by the Christian religious-worldview advisor Philine Lewek with Christian participants. Following the very musical service, our final module of the seminar took place: a feedback session on the seminar that included both substantive and organisational aspects as well as food for thought for the group. Many participants indicated just how much the work of the preceding days had lent them new strength and emphasised how connected to each other they felt after just a few days.

The first seminar of the new programme year came to an end full of new impressions and memories of the intensity of the encounter, of the collaborative work, and the shared religious praxis. And with many ideas and plans for the rest of the year’s work.

We would like to sincerely thank everyone who made the Autumn Seminar such a success. We are very much looking forward to continuing the work we have begun and to seeing all the participants again for the Spring Seminar, to be held in March 2023 in Krakow! 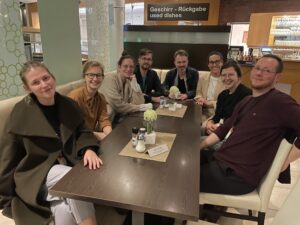 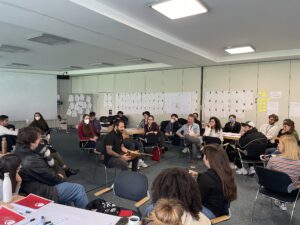 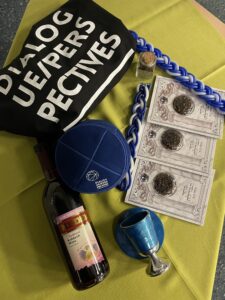 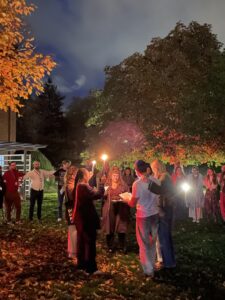 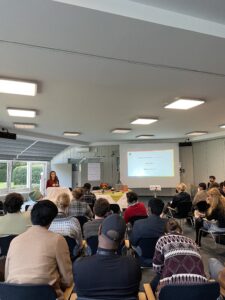 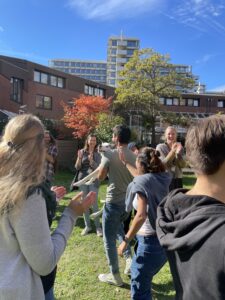