Putting an end to hiding in fear

“Now we’ll speak for ourselves”. So begins the manifesto of #OutInChurch, in which over one hundred full-time, honorary, and former employees of the Roman Catholic Church in Germany publicly outed themselves as queer. Some people might react to this news by thinking: “Being queer isn’t a big deal these days. Why should they make such a big fuss about it?” Others might say: “I’ve always known that a lot of Catholic priests are gay, that’s nothing new!” And others might wonder why queer people even still bother with the Catholic Church at all, when everyone knows that it is a structurally anti-queer institution.

The reality is more complicated. It includes a diversity of identities and stories, of people who grew up within the Catholic Church, people with deep roots in the Christian faith, or who have severed their ties to it after many years. It contains stories of pain, violence, and exclusion on the basis of gender identity and sexuality, but also stories of comfort, orientation, and support. Stories that are made invisible within a system of fear. It is about a fear that has stopped people from showing their true diversity. #OutInChurch – For a Church without Fear is a chance for these people to finally tell their own stories, making the diversity of gender and sexual identities within the Roman Catholic Church visible.

I am one of those people. The Catholic Church and Catholic institutions provided the setting for so much of my life as a child and adolescent in my hometown near Cologne. I attended a Catholic kindergarten, Catholic schools, made my First Communion and Confirmation, was an Epiphany singer and altar server. Later, I helped organise school holiday camps, Confirmation trainings, and interfaith youth projects as a volunteer. I remain a member of the Kolpingjugend Hürth, a Catholic youth organisation, and am active in its project work. Many of these were affirmational experiences for me in which I was able to grow in many ways while getting to know wonderful people. I didn’t experience any of the top-down patronising and regimentation common in other places. The Church as I experienced it had and has the potential to provide children and young people with a space for growth, for an open and critical approach to questions of meaning and religiosity, and for experiencing community. It provided me with an early push to take on responsibility and to want to fight injustice – including within the Catholic Church itself.

And yet: despite these positive experiences, and although I was very lucky with my Catholic socialisation (in comparison with many other children and young people), for a very long time I didn’t dare to show all the diverse aspects of myself. Instead, I kept my queerness hidden. Probably not in spite of, but because of all the positive experiences I had had. I was afraid to lose so many things that had so enriched my life. Sorely lacking were other (visibly) queer people in my Catholic environment who could have served as role models for me. Instead, I was well aware that people could lose their jobs within the Catholic Church if they lived their queerness openly. I experienced how gender and sexual diversity were not presented as normal at my Catholic school but were rather not discussed at all. In my fifth year, I saw how people spread rumours that a candidate for class president was gay. In the end, he wasn’t elected. Perhaps for other reasons, but the experience left me unsettled. The list of other obvious and more subtle discriminations that I witnessed as a young person, which I indirectly related back to myself, is long.

Nevertheless, I never personally questioned that, if G*d exists, queer diversity must also be G*d given.[1] I had been able to glean at least that much from the positive power of the Christian message. And yet, the worldly message was clear: queer people must fear rejection and exclusion in Catholic settings. And so, in such a heteronormative environment, I had to wonder: Would I still be accepted as the head boy of my Catholic school, or as the leader of a Catholic youth camp, if people knew that I was queer? Without relevant role models, it was impossible for me to decisively answer these questions with yes, and instead hid that part of myself out of fear of loss. In the end, this was the wrong decision, and a painful one. It is only over the last few years that I have, thanks to other, non-Catholic people and places, come to end my charade little by little, including in Catholic spaces.

After many small steps away from fear, it became important to me to not only more openly show who I am, but also to fight for the visibility and queer-friendliness that I did not experience in Catholic spaces as a young person. Contrary to my years of worry, I have experienced a great deal of positive affirmation along the way. Me and my team from the school holiday camp, for example, were able to work very openly on the question of how we could deal more sensitively with gender diversity and break down binary thinking. During a Confirmation training course, we received effusive praise from the young people in reaction to a workshop on queerness and the Catholic Church. There are, however, Catholic spaces in which I have encountered greater hurdles. For example, with the Initiative Queer Cusanus we continue to have to fight to prove the relevance of queer topics within my Catholic scholarship fund, something not everyone views as self-evident.

The discussions and encounters I have had within the Dialogueperspectives programme have reinforced me in my efforts. My first seminar with the programme in autumn 2019 included the topic “Identity politics, conceptions of self and their expression – an analysis”, which provided space to discuss the often ambivalent interplay between queer and religious identities. That queerness and religion may often come into conflict, but also often fundamentally enrich each other, was no longer just a muffled gut feeling within myself. Rather, I was able to experience how this productive friction is shared and theologically grounded across religious and worldview boundaries. I experienced empathy for queer struggles in many group and personal discussions at later Dialogueperspectives seminars, even if they were not a consensus position among the participants. These encounters and experiences outside of my own religious affiliation have motivated me to continue my efforts within the Catholic Church.

My participation in the nationwide #OutInChurch campaign represents a further breakthrough in queer activism within the Catholic Church. With this campaign, we have been able to generate a broad visibility that had previously been confined to a few brave pioneers. Our campaign derives its strength from the diversity of people and stories that we could bring together and make visible. We can show that we are not alone. We enrich Catholic spaces with our diversity and have always done so. It is time to break through the fear. 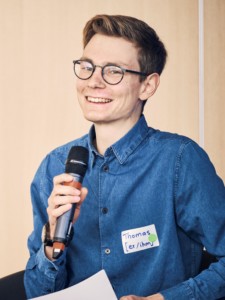 Thomas Spinrath, 25, is pursuing an M.A. in transformation studies at the Europa-Universität Flensburg and is a scholarship holder of the Catholic Cusanuswerk scholarship fund. He has been a Dialogueperspectives participant since the 2019/20 programme year. Thomas is engaged in queer-Catholic and queer-interfaith activism in a variety of spaces. He most recently organised the interfaith seminar “Queering my Religion” with the support of Dialogueperspectives in autumn 2021.

Our podcast episode from the series “(Re-)Shaping Europe” on this topic can be found here.

The ARD reportage “Wie Gott uns schuf” (“As God made us”) and testimonials on the campaign can be accessed via the ARD streaming service here (in German).

[1] This way of writing about the deity, unusual in Christian settings, derives from a (queer) feminist theology. It is intended to make clear that G*d transcends the bounds of anything that we can describe with language. The asterisk, as is common in German language usage, emphasises that G*d also transcends (patriarchal) concepts of sex and gender.