What we celebrate and why: Nowruz – the Persian new year’s celebration

Nowruz is the Persian new year, celebrated primarily in the Iranian cultural sphere on the day the sun enters the astrological sign of Aries, the start of spring (the equinox). The day falls on 20 or 21 March and begins at various times in different time zones, correlating with the respective time of the vernal equinox in each. It is not a primarily religious festival, and is celebrated by Muslims, Christians, Baha’is, Jews, and Zoroastrians.

With its recognition by the 64th General Assembly of the United Nations, it has been recognised as International Nowruz Day since 2010. The General Assembly stated in its declaration that “Nowruz is a spring festival that has been celebrated by more than 300 million people for more than 3000 years on the Balkan peninsula, in the Black Sea region, the Caucasus, in Central Asia and the Middle East.”

What I can say about our new year is that it is the loveliest holiday I have ever celebrated. The tradition reflects a 3000 year old history and is celebrated as the new year in Tajikistan, Afghanistan, Iran, and in the Kurdish areas of Iraq and Turkey. The Zoroastrians, including the Parsi in India, who were driven out of Persia follow Islamization, also celebrate Nowruz.

The festival itself lasts for 13 days and ends with a picnic on the 13th day. Seven objects – Haft Sin – that begin with the consonant ‘S’ in Farsi are placed on a table, the Sofreh-e Haft Sin:

A mirror (Ayineh), goldfish (Mahi ghermez), and a book (Ketāb), usually The Divān by the Persian poet Hafez, or the Persian epic poem Shahname also belong on the table, along with dried fruit and nuts, fruit, etc.

The Nowruz tables are beautiful, though the decorations vary a lot. Only the seven objects are required. 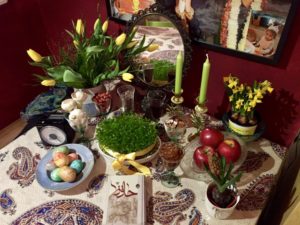 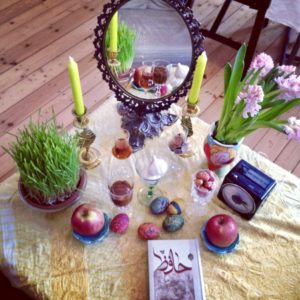 My memories of Nowruz belong to the best ones of my childhood in Iran. You could already feel spring coming before you went shopping for Nowruz, buying new clothes, shoes, food, and drink.

Children always received money from the adults, our Nowruz gift. Everyone would call each other immediately after the start of the new year – the younger ones had to call the older ones – and then there were visits from the second day.

It is important to know that Nowruz is celebrated by everyone in Iran, and by the Iranian diaspora worldwide, regardless of their religion. It is not a religious festival, it is a Persian festival. Even the Iranian regime has not been able to replace it with an Arabic holiday!

Believe in the spring

For, the kind breeze is celebrating the birthday of the beautiful flowers

On each and every branches

Close to each young leaf,

Has turned on lovely candles!

All swallows have come back

Singing the lovely song of freshness

Our narrow street is filled with spring songs

And the cherry trees

To celebrate the birthday of every flower

Fereydun Moschiri (1926-2010) was one of the prominent contemporary Persian poets who wrote poems in both modern and classic styles of the Persian poem.