“The Memory Monster“ and the future of contemporary Shoa witnesses

In early 2019, Israeli novelist Yishai Śarid published his new novel titled “The Memory Monster”. It tells the fictional story of an Israeli historian conducting research about the Shoa while working as a tourist guide in various German extermination camps in Poland. The novel deals with the struggles of contemporary culture of remembrance and how witnesses of the Shoa are treated. The provocative book led to wild discussions in Israel especially as well as in Germany on how to deal with the commemoration of these crimes against humanity, the genocide of millions of people by the Nazis. Śarid who is well known for his use of brutal language heavily influenced public discourse with “The Memory Monster”.

In my recent academic project, I reflected on the history of remembrance culture, especially regarding the role of witnesses. There is broad scale of being a witness. There are legal witnesses who saw crimes or accidents and speak in court, martyrs who were executed because they professed their faith and refused to abandon it, and historical witnesses who keep communicating their personal experiences from certain specific episodes in history. Different aspects from each of these forms of being a witness contributed to establishment of the so-called ‘moral witness’, which arose first in the course of contemporary history in the middle of the twentieth century in the aftermath of the Holocaust. The moral witness experiences suffering and humiliation but survives the cruel situation. Even though most of the murdered people in the Shoa were Jews, these victims are not martyrs in the sense of the aforementioned category of so-called ‘religious martyrs’. Firstly, they were not primarily killed because of their religious beliefs; the Nazis rather drew on constructions of a Jewish parasitic race, turning it into an ethnic genocide. Secondly, a martyr is always given the chance to put down what is thought to be a false belief. The Shoa however never meant to convert Jews but to murder every last one of them (also those converted to Christianity) and to erase all memory of Jewishness.

The intention of moral witnesses speaking about the experiences of the past is their mission of truth. They are fighting against oblivion and for remembrance. In this regard their work is not solely to remember the things that happened in the past but to ensure that they are not repeated. Being a witness is indeed an important principle of Jewish religious belief. In Leviticus 5,1 lies the fundament of the law to be a witness: “And if a soul sin, and hear a voice of swearing, and is a witness, whether he hath seen or known of it; if he do not utter it, then he shall bear his iniquity.” Bearing witness to the crime of the Shoa was and is a Jewish religious duty. A duty against what the survivor of the Shoa Primo Levi called the “the war against remembrance”.

In the immediate postwar era, German and other immediate witnesses of the Nazi totalitarianism and the Shoa have been the perpetrators themselves. As the surviving Jews were deemed too emotional and biased by contemporary historians, members of the post-Nazi society were believed to be the more objective witnesses. This perspective only shifted in the 1960s and 70s within the framework of the developing sub-discipline of Oral History. At the same time, it should be mentioned that the witnesses represented a vast majority of Jewry that did not survive the Shoa and were killed. As Giorgio Agamben puts it: “The real witnesses, the complete witnesses are those who did not and could not have given testimony.”

In Memory Monster, Yishai Śarid also tells the story of how contemporary witnesses are treated nowadays and how they are becoming the victims of a social and moral abuse. Politicians shake hands of survivors and listen to their stories to polish their political image. Witnesses can speak to school classes to demonstrate a well-built system of remembrance culture and youth education. But if their stories of cruel experiences are blocking political and economic interests, they are reduced to silence. Among other reasons, that is why they did not gain relevance during the Cold War: Their stories were not considered useful at that time, because there was a new enemy to be faced unitedly.

What’s more, the trial of Adolf Eichmann, the main person in charge of the systematic deportation and genocide of six million Jews, shed light on the instrumentalisation of Jewish witnesses. More than a hundred witnesses shared their personal stories from various German concentration and extermination camps with the public in court. While witnesses collapsed because of their traumatic feelings resurfacing again, chief prosecutor Hausner clarified that the survivors were only testifying in order to share their horrible stories with the Israeli people. None of the testimonies of the Jewish witnesses provided any compromising evidence of Eichmann being guilty, given the fact they as Shoa survivors could not have known about Eichmann’s role in the systemic persecution and annihilation of Jews while being inmates of the camps. Hence, Eichmann was convicted based solely on file data.

The Memory Monster which I have referenced a few times now is named after the internal monster that the protagonist is fighting against. It is described as a symbolic incarnation of the survivors’ traumas. Even though the original monster(s) – Nazis, humiliation, concentration camps, genocide – do not exist anymore, the witnesses are facing serious struggles decades after the end of war and persecution. Researchers working with and interviewing contemporary witnesses from the Shoa have noted that one can feel the immediacy of dangerous experiences. While this memory monster is an imaginary one, it is simultaneously very specific. One weapon against this monster of trauma can be resistance against the oblivion of memory. In Śarids’ story, the protagonist comes up with a different strategy to defeat the monster, depicting Śarids’ provocative approaches and brutal language style. As a strategy against the aftermath, he recommends “being a bit of a Nazi”.

“Being a bit of a Nazi” does not mean to actually commit crimes and enforce persecution but to be capable of killing without mercy. In the Monster it is a little boy who explains the alleged advantage of Nazism: totality. As such, one must not be weak but go to the last extremity. In order to survive as a present Israeli people and country, Israeli Jews are in need to defend their identity with everything they have and are. This provocative concept touches upon discourses from inside the Israeli society on ‘enemies’ of the Israeli people. Despite being Jewish himself, Śarid’s use of antisemitic stereotypes –for example depicting the Jews as an inferior people or the reversal of perpetrators and victims – is often terrifying. From a German non-Jewish perspective, this may make his novel appear, as if he was stirring up anti-Israeli resentments.

By doing this, Śarid fuels the contemporary discourse taking place in the Jewish-Israeli majority society, dealing with the question of how remembrance culture can work today. Following the warning of Primo Levi who stated that “[t]he further the events recede into time, the more the construction of a convenient truth grows”, we need to keep up telling the stories of Shoa victims. Otherwise, the memories of this genocide will dissipate, meaning that the Nazi ideology would prevail in the long run. That is why we need to take responsibility for our political acts and to shape remembrance culture. There are many ways in which political and societal organizations are using new methods to develop multi-dimensional approaches to Shoa remembrance culture. One the one hand it is important to showcase the pluralistic experiences concerning the Shoa. On the other hand there are various ways to convey those testimonies apart from discussions with Shoa survivors such as: historical education at memorials, bottom-up-pedagogy, medial displays and more.

A next step concerns the role of secondary witnesses, so that we as post-Shoa generations can preserve and mediate the experiences of survivors to the next generations. To build a society where these stories can be told, we need to form and preserve an open society where minorities find safe spaces and can be part of democratic and remembrance processes. And this not as spectators or museum objects but as active creators and supporters of a pluralistic commemoration. Last but not least, open society does not only secure minorities but everyone as individuals. 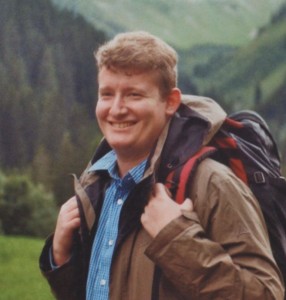 Lorenz Hegeler (*1998) was born in Mainz, Germany. He holds a Bachelor’s degree in European Ethnology/Folklore Studies and Catholic Theological Studies from the Julius-Maximilians-University Würzburg. Currently he is studying to obtain a Master’s degree in Religious Literacy at the Otto-Friedrich-University Bamberg, focusing on Jewish-Christian relations historically aswell as theologically. He was a DialoguePerspectives participant of the 2020/2021 programme as well of this year’s annual European Leadership Workshop.