The Fashion revolution: how hijabi influencers are fighting stereotypes

When people think about the hijab, they usually think about religion, personal choice, or obligation. Fashion, on the other hand, is definitely not the first thing that comes to mind. And compared to other topics, like human rights (for marginalized people) or social problems, fashion could be considered a non-fundamental thing to discuss, but “Fashion is not about utility. An accessory is merely a piece of iconography used to express individual identity” (yes! That’s The Devil Wears Prada!). Fashion influences our choices and visions, even of people who say that they don’t follow trends.

For quite a while now, social networks have given people the chance to set new “beauty standards” and normalised every person being beautiful in his/her/their own way. Fashion industries have started to have new kinds of models, like people with disabilities, queer people, and so called “curvy” models. But what about religious minorities? Thanks to social networks and some Muslim influencers, the perspective on hijab fashion is changing. They are changing the visions of Muslims and giving teenagers the chance to feel more accepted by their peers and to wear their hijab while feeling trendy.

The aim of this contribution is to focus on European Millennials and Generation Z with an Islamic background who are religiously observant, while focusing on two questions: first, how and why has the fashion industry become more inclusive of hijabis? Secondly, how might we understand the role of Muslim influencers and their social revolution?

The current revolution of fashion in general aims to be more inclusive of minorities. Like the “rainbow collections” sold by many fashion companies during Pride month, or the well wishes for holidays of religious minorities (in the Western world) like Eid, Hannukah, or Diwali shared on the brands’ social networks. Of course, this can obviously be seen as a marketing strategy – the more your clients celebrate, the more you sell – but it can also be seen as a sign of openness towards religious and other minorities. Every brand, from fast fashion to the luxury segment, have their target clients (teenagers, families, business or trendy people) and their usual market. But they also know that the most important period of their year in Europe and the USA is obviously Christmas, while for Middle East countries it is Eid al-Fitr (and French and Italian brands know it very well). During those specific times, brand turnovers usually double compared to “non-holiday” times. Therefore, the fashion industry strongly takes the consumerist vision of religion into consideration. They prime their markets using television (luxury brands don’t use this strategy) and magazine advertisings, but also through social networks – and online influencers are usually the better and most productive option, especially for Millennials and Generation Z.

In Europe, some hijabis have conquered fashion magazine covers in the last few years. For instance, Vogue France, the country with the strictest laws regarding the hijab, published Ugbad Abdi on its cover in August 2022. She is a Somali-American model who has worked for luxury brands like Louis Vuitton and Prada and who wears the veil and practices Islam. Similarly, Tasnim Ali, a young Italian-Egyptian influencer, was the first hijabito appear on a fashion magazine cover in Italy (Donna Moderna, May 2021). On her social network pages, she switches between her life, fashion, and religion, and usually answers people’s questions about Islam with humour. She has also published a book titled “VeLo spiego – un velo contro i pregiudizi”[1] in which she confronts people’s stereotypes about the hijab, Ramadan, and everyday life. Tasnim has also appeared in the pages of “Smemoranda”, the most famous and iconic school diary in Italy.

On the one hand, Ugbad Abdi and Tasnim Ali could be considered to represent consumer society. On the other, they can be seen as role models for all those Muslim teenagers who decide to wear the hijab. Adolescence can sometimes be a “weird” and difficult moment in life and having a “public and cool” icon who looks like you can help young people trying to survive in a society full of judgements and prejudices. Tasnim and Ugbad help teenage hijabis to feel more accepted by their peers and to think that “it’s possible to wear the veil and be fashionable”, and this can influence women and teenagers’ lives in a positive way. I remember one of my Muslim “sisters”, who is thirty years old, once telling me that she wishes she had had an example like Tasnim Ali or Ugbad Ali to follow when she was in high school.

Fashion is often considered to be unimportant because it is (usually) not linked to activism. However, in its own way, fashion can help people to fight stereotypes. When a magazine like Vogue decides to publish a young and beautiful woman proudly wearing the hijab, looking into the camera while hugging a naked woman, it is a revolutionary sign. All the more so in France, the most secular country in Europe, where politicians use “secularism” to promote Islamophobia. It can be considered a sign of “openness” in the world of fashion, and this photograph can also suggest a feeling of “sisterhood”.

We can conclude that social networks are indeed influencing fashion and vice versa, and that some hijabi influencers are fighting Islamophobia and racism with the inclusive attitude of new trends and their desire to be positive examples to new generations. This makes it possible to think that one day, no woman will be judged if she decides to wear or not to wear the hijab and to be proud of her own religion.

[1] This translation is tricky, literally meaning “I explain it (lo) to you (ve) – a veil against prejudices” but in Italian “velo” also means veil. 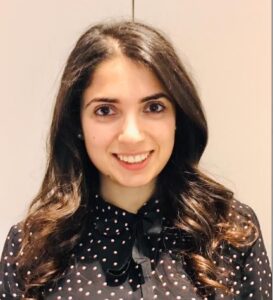 Eleonora Pede just submitted her PhD titled “Mā bayna, Interreligious dialogue in Europe. Faith and homosexuality: utopias and realities” at the Faculty of Theology of Lugano (Università della Svizzera Italiana) with a joint programme with La Cattolica University. She is a KAICIID fellow. Her areas of research are gender studies and European Islam.