Stumbling Stones as a Grassroots Project between Memory and Interreligious Dialogue

The Case of Veria, Greece

The “Stolpersteine”-project (these are commemorative plaques; the term literally means stumbling stone) was initiated by the German artist Gunter Demnig in 1992. The aim of his work is to commemorate individuals at the last place of residency which was freely chosen by the commemorated person before he or she fell victim to Nazi atrocities, terror, euthanasia, eugenics, deportation to a concentration, or extermination camp.

The slogan of the project might be summarised by the poignant phrase “One stone. One name. One person“. On this basis, the Stolpersteine-project works through a three-staged-process; when you are strolling, you stop for a moment to read what is written on the stone by thinking. This might create a certain emotion related to a sense of historic responsibility for the victims of National Socialism.

It goes without saying that this procedure is very general, and every individual builds his or her memory on two levels; a personal and a collective one. On the level of collective memory, Europe – on different levels and with varying intensity – suffered from the atrocities of National Socialism and its collaborators between 1933 and 1945, and the Holocaust marked this period. The Stolpersteine project aims to commemorate not only the six million Jewish victims of the Holocaust but also Sinti and Romani people, Jehovah’s Witnesses; homosexuals; mentally and/or physically disabled people; people persecuted for their political views, their religion, their sexual orientation or the color of their skin; forced laborers; men considered deserters; people who were persecuted on grounds that they were considered “asocial” such as homeless people or prostitutes – in short, anyone who was persecuted or murdered by the Nazi regime between 1933 and 1945.

On this basis, I contend that the Stolpersteine project should be understood in the context of the discourse on Human Rights, and remembering the Holocaust is a human right imperative duty of the European society. Politics of memory lies at the roots of the Council of Europe. As stated on its official website, ”[t]he Holocaust is a European heritage that has common roots in the European nations and there is a European responsibility that should be accepted’’. The Council of Europe promoted the introduction of a Day of Holocaust Remembrance and Prevention of Crimes against Humanity, while Germany and France have chosen 27 January (the day when Auschwitz was liberated) as the international Memorial Day that commemorates the victims of the Holocaust; the genocide of European Jews by Nazi Germany between 1941 and 1945. However, one day seems to be not enough to commemorate every individual victim of the Nazis atrocities. Thus, the Stolpersteine project seems to give space to every individual victim, as every commemorative brass plaque bears an inscription with the name and life dates of victims of Nazi extermination or persecution.

Needless to say, my point is not to equate the International Holocaust Remembrance Day and the Stolpersteine project, as they constitute two different concepts with different departures, politics, and functions in different spheres. The International Holocaust Remembrance Day is an organized memory politic by the Council of Europe, whereas the Stolpersteine project is voluntarily organized, as an initiative, by civil society. In this vein, the Stolpersteine project functions as an urban grassroots initiative that aims to raise awareness for the local and public history by reinforcing the collective memory, combating anti-Semitism and any form of racism and discrimination, and to declare NEVER AGAIN.

What’s more, the Stolpersteine-project can simultaneously be located between the sacred and the secular sphere and promoting not only memory but also an unofficial interreligious dialogue in the urban landscape, as the victims of the Nazis’ atrocities, like Jews, had different cultural and religious backgrounds than the elite Christian majority. It is thus a project that filled a lacuna left by the public and private sectors in order to raise awareness for victims of Nazi persecution, to commemorate their Jewish neighbors, and to counter anti-Semitism and informally promote Holocaust remembrance.

One instance of the Stolperstein project took place in the city of Veria (Greece) on Monday, June 3rd, 2019. The remembrance project in Veria dedicated six stumbling stones to Jewish students from the town. These 10x10cm brass plates have inscriptions with the victims’ names and few biographical data. Daniel Aser, Pinto Isaac, Pinto Moses, Azaria Mischel and Benroubi Rachel – five “Stolpersteine” were inserted into the pavement in front of their former Gymnasium in memory of these students. Additionally, one “Stolpersteine” was inserted into the pavement in memory of Lora Azaria in front of the former Jewish school of the town of Veria.

The Jewish presence in Veria dates back to the Roman era. Saint Paul- and also known by his Jewish name Saul of Tarsus – visited the city and preached in the synagogue. Although no specific information is available, it is likely that a small Jewish community existed in Veria in the Roman and Byzantine periods. By the end of the 15th century, this community grew due to the arrival of numerous Jews from Spain and Portugal. The Jewish community of Veria always kept strong ties with the neighboring large communities of Thessaloniki and Monastir. At the start of the war, Veria had a Jewish population of some 600 to 650, to whom were added about 200 refugees from other parts of the country. 460 Veria Jews died in the Holocaust, 448 of them at Auschwitz. 136 of the town’s Jews escaped deportation by fleeing to the mountains, 123 returned after the war. Today there are no Jews in Veria.

The data of the Jewish students, in which their names were written on the commemorative plaques, were part of the archival work of a local lawyer and distinguished author; who is a member of the “Citizens Initiative for the Stolpersteine in Veria”. The artist Gunter Demnig was present at the event by respectfully inserting the commemorative plaques. The project was organized by the Ephorate of Antiquities of Hemathia, Friends’ Association of Polycentric Museum of Aigai, Citizens Initiative for the Stolpersteine in Veria & Thessaloniki, 1st High school of Veria and supported by the local office of the Heinrich Böll Foundation in Thessaloniki, Greece.

To sum up, the Stolpersteine project is a collective endeavour that cannot be implemented without the collaboration of Citizens’ Initiative, organizations, public institutions, and grassroots actions, that has had an impact even in towns with a very small Jewish presence prior to the Holocaust, such as Veria in Northeastern Greece. 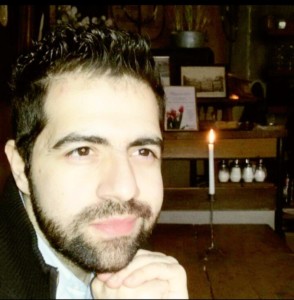 Ioannis Stylianidis was born in Thessaloniki, Greece. He is a PhD candidate at the Heidelberg Center for Jewish Studies Heidelberg (HfJS) and the University of Heidelberg. Ioannis was a Humanity in Action Fellow in Warsaw, where he received education in Human Rights by participating in educational projects for young people aimed at raising awareness for collective memory and combating antisemitism.