Introducing: This Is Us – Insights from our participants

Over 70 students and PhD candidates from seventeen European countries are participating in the 2020/21 academic year’s DialoguePerspectives-Programme. With their manifold backgrounds, our participants reflect the religious, political, and societal diversity of European societies.

In our new blogpost-series, our participants share their personal approaches towards their various fields of engagement with the wider public, for example by showcasing their current activist projects, discussing their research topics, offering a glimpse into their networks, or simply reflecting on the current state of affairs in their countries of residence.

This Is Us is committed to the discussion and representation of a wide range of opinions on and approaches to the current state of affairs. The variety of stances and insights (that can and should also contradict each other) reflects the diversity of our participants and their individual backgrounds as well as their attitudes to religion, world views and the state or public policy. Thus, it goes without saying that the viewpoints presented in the blog do not necessarily reflect those of DialoguePerspectives. They shall moreover serve as a point of departure, as food for thought for the discussion of pressing issues of our time.

In this spirit, we would like to encourage you to actively participate in the debate by commenting on the posts below or sending an email to us: contact@dialogueperspectives.org

Today, we’re very excited to kickstart our new series with a post by our current participant Eleonora Pede on the potential influence of German Liberal Muslim institutions on LGBTQ+ and feminist Muslim and Catholic communities in Europe.

Building Bridges. How German Liberal Muslims are influencing discourses on LGBTQ+ and religious Liberalism in Europe

My first encounter with a liberal vision of religion was in the framework of the Berlin-based self-proclaimed liberal Ibn Rushd-Goethe Moschee in 2017. This is one of the first instances in Europe of a mosque led by a woman, offering an egalitarian praying space for men and women, as well as accepting all people regardless of their gender identity.

A couple of days before my arrival in Germany the Italian television dedicated a primetime report to the mosque, and as a European feminist in love with Islamic studies I really wanted to experience this reality with my own eyes.

The creation of this new community in Berlin has sparked different reactions in the public: on the one hand, it obviously garnered a lot of well-meaning curiosity. But on the other hand, it simultaneously received harsh criticism from some Muslims groups, culminating in that the mosque’s founder Seyran Ateş received a series of death threats.

In the course of my stay in Berlin, I had the chance to attend several meetings organized by this new liberal community, to hear their stories and to understand their idea of inclusivism. Intense grappling with their approach to Islam led me to conclude that I did not fully support their vision of religion and feminism. For instance, as opposed to Ateş, I strongly believe that all women should be able to choose to wear the hijab. Furthermore, I support the idea that all workplaces, be they in the private or the public sector, should permit to wear it. In Italy, for instance, there are no rules against the use of hijab, even if it is not easy to see a woman with a headscarf working as a public employee and sadly there are still many Italians who think that a woman wearing an hijab is obliged to do it by her family. But a religious symbol should, in my opinion, not be considered as a symbol of patriarchy.

After my experiences with the Ibn Rushd-Goethe Moschee I decided to further analyze the liberal vision of Islam, dedicating my time to the study of the Qur’an and its tafsīr from a feminist perspective. I also had the chance to translate a part of Amel Grami’s book Al-Ihtilaf fi al-taqafa al-‘arabiyya from Arabic to Italian, focusing my attention on LGBTQ+ Muslims. In the course of my study and research, I realized that there were many LGBTQ+ Muslims in Italy who were sincerely inspired by the foundation of the Ibn Rushd-Goethe Moschee. In my opinion, this enthusiastic reaction can be seen as a reflection of the widespread attention that the new mosque garnered in  Italian media… and honestly, I cannot really understand the reason. Although Italian TV shows and news sites usually don’t share reports on liberal Islam, this mosque has drawn a lot of attention, maybe because it fashions itself as an inclusive place for all people, regardless of their provenance, faith or gender identity. However, and this is a fundamental flaw in my view, this inclusionary attitude comes to a halt when it comes to women who for instance independently decided to wear the niqab, or if you wish to work in the public sector and do not want to sacrifice your headscarf.

This notwithstanding, the German examples of inclusion within Islam, like the Liberal-Islamischer Bund and the Ibn Rushd-Goethe Moschee have inspired numerous organizations across Europe to create some safe-spaces within religion where people can express a more complex version of their identity. Prime examples are the Centre Calem in Marseille guided by a gay imam, the Italian group Sono l’unica Mia, where a young queer woman is trying to challenge the vision of Islam as a patriarchal religion through her activism, and the Offene Moschee in Switzerland, a place where men and women can pray together.

Talking with some Italian Catholic groups who work on pastorals for rainbow worshippers, organizing shared prayer meetings and events on faith and homosexuality (more or less like Keshet in Jewish context) during a pastoral meeting, we realized that these Islamic groups could also inspire also other religious groups, which is why we started to support interfaith dialogue that could help LGBTQ+ people to feel more accepted by their religious community, even though their religious leaders don’t support equal rights for homosexuals and profess that “homosexual acts are intrinsically disordered”. I thus spent this summer travelling to Germany to collect testimonies from LGBTQ+ Muslims as well as their Christian “brothers and sisters”. These testimonies are fundamental for my PhD research on the topic.

Investigating the work of these liberal groups gives us the chance to reflect on two main issues. Firstly, the role of women within Islamic religion in a European context, where female leaders fight for equal rights and recognition by their male colleagues in the religious sphere. Is it practically possible to be feminist, European and Muslim? Furthermore, can Islamic feminism potentially help some Christian groups in Europe to be more open-minded towards women and to accept them as religious leaders?
The second point is to understand if LGBTQ+ worshipers can be accepted by their religious groups and to comprehend if their religious identity is compatible with their gender identity. The method proposed for my research project will be divided into two main parts in order to create a comparison. The first part will start with a detailed study of the Islamic sources and the analysis of liberal European Muslims based on a close reading of Islamic traditional sources such as al-Qur’ān, al-Sunna and the tafsīr. The second part will analyse Vatican declarations on interreligious dialogue and homosexuality after the Second Vatican Council. Finally, the empirical part comprised of interviews with LGBTQ+ Muslims and Catholics will be fundamental in order to contextualise the theoretical work of the project.

Summing up: with my research, I would like to comprehend if it is possible to create a bridge in contemporary European society between religious and gender identities, where both elements are equally respected. It is my hope that this bridge can help to fight religious intolerance and hatred of LGBTQ+ and that it can furthermore develop a new perspective on the role of these groups within religious communities. Who knows, maybe this will be a contribution that can help Europe to be more “United in the Diversity”. 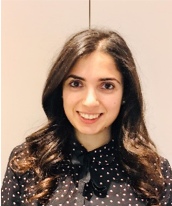 Eleanore Pede is a PhD candidate in a joint programme of the Faculty of Theology in Lugano (Switzerland) and La Cattolica University (Milan/Italy) based in Rome/Italy. In her project she is conducting a comparative study of the influence of Muslim and Christian ethics in Europe pertaining to the academic field of Gender Studies.