Going Beyond: The Relevance of Dialogue between Worldviews for the Non-Religious

I knew I was an atheist since hearing the term for the first time when I was 12. My family was mainly (though very loosely) Protestant and partly Muslim. Most of my friends were not very religious either, despite coming from rather strict Buddhist, Catholic or Hindu families. The majority of them turned atheist or agnostic as young adults, particularly due to their parents’ religious rigorousness having resulted in them developing an aversion towards religion in general. One could thus say I lived in a “Not-Very-Religous-Bubble”.

A signum of our times is the relevance of dominant trends in certain online spheres. Being a teenager in the late 2000’s and early 2010’s and questioning my own worldview confronted me with a narrative I would retrospectively consider harmful for open and intersectional dialogue between the religious and non-religious. “New Atheism” is the name of the movement in question, coined by the so called „Four Horsemen of the Non-Apocalypse“: the late biologist Richard Dawkins, philosopher Daniel C. Dennett, neuroscientist Sam Harris and the late publicist Christopher Hitchens. As James E. Taylor summarized in the Internet Encyclopedia of Philosophy:

The New Atheists make substantial use of the natural sciences in both their criticisms of theistic belief and in their proposed explanations of its origin and evolution. They draw on science for recommended alternatives to religion. They believe empirical science is the only (or at least the best) basis for genuine knowledge of the world, and they insist that a belief can be epistemically justified only if it is based on adequate evidence.

Meanwhile, this school of thought can be described as a popular rhetorical tool for anti-religious sentiments. Sadly, these ideas have persisted for two decades now and the implications are clearly visible: one could, for instance, experimentally type “atheist” into the Instagram search bar and the first blog that is suggested goes by the name “islam.is.wrong.and.here.is.why”. Other users have a crossed-out Christian cross as their icon and most search results show “meme” pages making jokes on behalf of religious institutions and observant people.

As a passionate advocate for reproductive rights and LGBTQI+ issues I often encountered forms of religious fundamentalism at demonstrations, from confessional NGOs and in public discussions. I thus can confirm that misdirecting one’s aversion regarding these extremes towards all religious people could become a tempting habit. Furthermore, it is easy to be seduced by the notion that science is infallible when one has limited knowledge on how and under which conditions scientific statements are produced and published.

My studies in political science and cultural studies combined with my participation in Dialogueperspectives resulted in a deeper examination of the concept of knowledge, its power structures, and how it is approached in everyday dialogue. For my Bachelor’s thesis, I focused on a topic titled “Knowledge Production and Power – The Unity of Reason versus the Plurality of Perspectives in Political Theory” and I am currently completing my Master’s degree in social sciences with a focus on the sociology of knowledge. Therefore, it was admittedly inevitable to come across the name Dawkins and his scientistic approach in the course of my research.

My B.A.-thesis interrogated a central dichotomy in interdisciplinary scientific discourse on knowledge production: the second and third generations of the Critical Theory of the Frankfurt school versus post-structuralist arguments, which originated in France during the 1950’s. In regards to the truth-seeking function of science, the late Critical theory is known for its precise attempts of defining truth and reason in a non-positivist fashion, while post-structuralism avoids truth claims and words such as objectivity, rationality, reason and the concept of truth altogether. While critical theorists view universal truth claims as a (volatile) method of liberation from arbitrariness, post-structuralists consider these dangerous tools of power.

Post-structuralism’s emphasis lies instead on reflecting one’s own subjectivity as scientists and individuals, who are not unaffected from their specific social contexts, as well as viewing a complex mosaic of many “situated knowledges” (a term coined by feminist biologist Donna Haraway) as the closest thing to truth we can reach. This includes a critique of natural sciences and their involvement in eugenics, Social Darwinism, biological determinism and other excesses of sociobiology, which, despite their allegedly unideological underpinnings, followed obvious ideological agendas that propagated sexist, racist, ableist and even classist ideas.

As one may suspect correctly, “New Atheist” representatives of this fully-fledged scientism are prone to reject post-structuralist appoaches. In the 90’s the “science wars” ignited by the physicist Alan Sokal’s famous hoax not only marked a massive ridicule of post-structuralist theory, but also intensified the general rivalry between natural sciences and social sciences. Sokal’s hoax was the admission of a paper called “Transgressing the Boundaries: Toward a Transformative Hermeneutics of Quantum Gravity“, flavoured with typical post-structuralist rhetoric and classical sources of this school of thought, to the sociology journal The Social Text. However, the content was deliberate and absolute nonsense. Yet, The Social Text published it. In a following article on his hoax, Sokal explained that the point of this unconventional experiment was to expose post-structuralism as “elegant nonsense” by actually getting his parody published in an academic journal. Sokal then pitted scientism on the basis of the (alleged) irrevocable neutrality of natural sciences against the post-structuralist trend he wished to expose. It isn’t too surprising then, that one vocal supporter of Sokal’s publications was none other than aforementioned Richard Dawkins himself.

These “science wars” all the more exemplified the importance of self-reflection, responsibility and interdisciplinary thinking in all branches of academia. On the basis of this debate, the complex relationship between subject and institution, the power imbalance of truth claims, dominance inside and in-between the academic disciplines, unequal funding of scientific projects, and ultimately the interdependence of politics and knowledge production became undeniably visible during my research.

On a personal note and in terms of inter-religious dialogue and the sociology of knowledge production, I consider the morale of post-structuralism ultimately to be the less hierarchical, less antagonistic, more intersectional, more contextualizing and, most importantly, more fruitful basis for a respectful culture of discussion. Despite its deconstructionist approach, it simultaneously enables us to criticize fundamentalism of any kind. In opposition, the generally hostile nature of scientism as popularized by “New Atheism” has caused a discursive rift and damaged the possibilities of mutual understanding between believers and non-believers, instead of creating an effective and constructive critique of fundamentalism. This is especially harmful as the “criticism” of  “New Atheists” is, more often than not, focused on minority religions in the global north. In our politically fraught times, this can specifically feed into hateful ideologies instead of promoting open-mindedness.

Going beyond by learning about the vastness of religious diversity, contemplating secularism and hegemony, asking ourselves the questions “Where does institutional criticism end and incitement begin?” or “From which social position do I speak?” and by not pitting science and the metaphysical against each other, we can cement a more sympathetic foundation for dialogue. A foundation that certainly enriches people of different faiths, atheists and agnostics respectively in their perspectives and creates a new sense of solidarity among us. 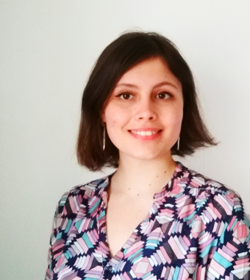 Svea M. Schnaars grew up in Bremerhaven in Northern Germany. She holds a Bachelor’s degree in Political Science and Cultural Studies from the University of Bremen. She is currently pursuing her MA in Social Sciences at the University of Oldenburg. Svea holds a scholarship of the Rosa-Luxemburg-Foundation and is furthermore active in fields of LGBTQI+ – rights, feminism and educational justice.