Do Inclusion and Acceptance Stand a Chance?

I started my professional career not in academia but in healthcare and worked in the sector for over 20 years in the United Kingdom. During my time as a clinician, my area of specialist interest was in the physiological and psychological health and well-being of Migrants, Refugees, and members of Asylum-Seeking communities. I have worked with those fleeing areas of conflict and war and worked with families, adults, and unaccompanied children. This blog piece serves as a tribute to and reflects the reality of groups I encountered who had chosen to travel, dangerously and in desperation via different unofficial modes and channels to the UK, and because of their undocumented status were afraid to access health and social care. Through a service that I developed in the National Health Service (NHS) and my partnership and engagement with various charitable organisations and community networks, I worked with those in precarious health situations. This included women who were pregnant in their last trimester of pregnancy who had not accessed ante-natal care, those seriously ill with chronic health conditions and some who had faced serious sexual assault. I moved to Ireland 12 years ago and began my journey into teaching and academic research and have continued as a researcher/educator and as a human rights activist to support new communities. The aim of this blog piece is thus to shine a light on an area where a lack of immigration status creates not only inequalities but also the marginalisation of society’s most vulnerable.

This blog piece is hopefully an opening for a conversation that would create further layers of understanding of our changing world, culturally, socially, and politically in terms of migration. It is a piece that raises questions and concerns but also reaches out to the perspectives of others on a complex subject area. The author welcomes responses of those who read this and encourages others to add to the discourse from an academic, activist, interreligious and identity perspective. All conversations begin with an idea, a concern, or a viewpoint but preferably not one that is definitive, constituting rather an invitation to share knowledge, research, and both anecdotal and personal experience, creating within this process an opportunity to increase all our understanding of the issues highlighted.

Women and men embark on migration worldwide but their experiences of the journey and everyday life in the country they choose to settle in can be remarkably different. Migration for women without means, unfortunately has a gender dimension in terms of their vulnerability during the journey to a perceived place of safety and on arrival, to exploitation. The impact on women and how their circumstances, employment opportunities, health, immigration status and socio-economic needs are affected differs from individual to individual, community to community and also depends on where they choose to or must reside. The reality of the experience of women without means and undocumented women does not fit into the general public’s understanding of migration as a process. A process that is steeped in legal frameworks, national treaties, and international laws. It is not always an arrival at airports to a new and exciting future of education, employment or reuniting with loved ones or family. The reality is harsher and darker.

Migrant women within some of these societies are being excluded, disregarded, and treated with intolerance due to their gender, ethnicity, culture, and faith in response to these same markers. In most societies worldwide, such markers can be the indicators of our eligibility for social acceptance or rejection. These markers are developed and retained over decades and are based on beliefs and values that are sometimes unwittingly ethnocentric and xenophobic. They are developed over generations and associated with events that act as tipping points for a nation grappling with social, economic, and political upheaval and flux. The same values and beliefs are then incorporated into language and communication that is applied socially and within standards and policies in education, the media and in political rhetoric. Often those subjected to the resultant microaggressions are women of BAME (Black, Asian, and Minority Ethnic) communities. The lack of social and emotional sensitivity, and the patronisation of the ideas, skills, and abilities of BAME women promotes segregation and not inclusion.

There is an urgency for discourse and exploration of the challenges that are present and rising in Europe in terms of intolerance, right-wing rhetoric, and are a backlash against the rights of vulnerable migrant women. I choose not to name or pinpoint any country, or nation as all nations have in some form or other at a certain point in time, subjected women to diminishing narratives and attributes. Whilst we have moved beyond these associated stereotypes in many parts of Europe, I have been concerned by conversations with friends living in Europe where right wing rhetoric and nationalistic policies have emerged to negatively affect political landscapes and attitudes towards migration and migrants. These changes have arisen from public and political concerns over safety and security – highlighting terrorism in association with faiths creating fear over the beliefs of those considered the ‘different other’. The changing landscape of homogenous and mono-cultural communities as migration creates new groups with cultural and faith systems that are different in practice and philosophy, can generate fear. A fear of losing traditionally held local and national cultures, values and ethnic continuity in their communities and societies. Social cohesion and inclusion often well-defined and ideal on policy documents do not always translate into practice nor create acceptance. Change is not always welcomed when that transition may seem unfamiliar and entails financial and monetary investment in economies that may already be fragile.

We need to study and understand migration from several intersectional positions such as gender inequality, familial roles of women, the gendered labour market, gender-based violence, education, discrimination, and poverty. These issues are often exacerbated if the woman/women are undocumented. Furthermore, the complex process of visas/permits/international protection and permanent residency creates more barriers and hence alternative routes taken by those desperate to leave places of risk and fear. While some EU nations have accommodated and facilitated migration processes, the recent mass exodus to some European areas has created a negative response with closure of doors to those seeking a safe haven. As a result, your social capital and currency as a viable and capable individual is subsumed by the negative rhetoric and misrepresentation of what you allegedly represent as an undocumented woman. Women who do not possess legitimate status face insecurity and are in precarious situations in terms of livelihood, employment, and access to services. This also places them in a compromised situation when seeking to access legal, health and social services. Equally, advocacy and support can be impeded by the lack of such status.

Furthermore, the lack of egalitarianism and advocacy for the representation, and promotion of undocumented minority women prevents the empowerment of those within these communities and renders them invisible. It not only reduces them visually and vocally to the periphery of most European societies and consequently narrows their pathway to success and leadership in these environments but also diminishes their ability to contribute to positive change in Europe. These exclusions and lack of both status and opportunity prevent the representation of women in areas such as education, meaningful and successful employment as well as political presence. Migrant and undocumented migrant women and the stories of their journey, their struggle and subsequent achievement could inspire and promote the reality of inclusion and integration.

Tokenistic representation of the ‘good’ immigrant and the ‘successful’ immigrant creates a cultural and social stereotype, rather than speak of the reality of many immigrants and those who cannot aspire to either, due to their undocumented status. The intersectionality of their experience is multi-fold and complicated by the multiple forms of oppressions they experience. Oppressions that take the form of racism and microaggressions in their daily lives and that of their families and children, discrimination when applying for a job or lack of the opportunity to gain economically viable employment thus negating the potential of migration. To ignore their marginalisation is to nurture by default their lack of voice and their continued invisibility which contributes to their exploitation by both cheap labour forces and gig economies.

As a society, we need to address the reasons for the choice women make to emigrate and the rights all women and migrants should be entitled to, as human beings. Women who seek a better place and life are often also caregivers and parents. The choices they make are not just for their own safety, security, and well-being, they also hope to create and ensure the same for their loved ones. Therefore, we need to fully address the rights of women who, besides children, may be the most vulnerable new arrivals to a country. Whatever their legal status, nation states should fulfil human rights obligations and provide a fair and supportive system of engagement with vulnerable and undocumented migrant women, to enable and empower those at risk of criminal and economic exploitation.

I hope this begins within this space a discourse on marginalisation and exclusion from mainstream society of new and perhaps less visible migrants and the exploration of other vulnerable identities. We co-create the societies we live in and our humanity in that context should be subject to scrutiny. In my research on diversity and interculturalism and in my activism against racism I have chosen to engage in conversations that create learning, knowledge, understanding and a shared common purpose – a civil society where human rights and empathy promote a path to inclusion and belonging. 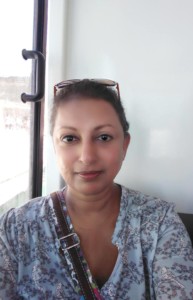 Santhi Corcoran is a lecturer and PhD researcher in Education at the Faculty of Learning, Society and Religious education in Mary Immaculate College, University of Limerick, Ireland and a current participant of the 2020/21 programme year at Dialogueperspectives. Her research interests explore diversity, migrant health, community and belonging in educational spaces. She is also the co-founder and co-chair of the Midwest Migrant Community Network, Limerick, Ireland which works collaboratively with local groups, individuals, organisations, and agencies to promote inclusion, social cohesion, and engagement of migrants in civil society.