Dialogue in Practice: Serving as a reserve officer in the Bundeswehr

In spring 2010, right after the final exams in high school before graduation, I received the conscription order to do the mandatory military service in Germany. In my family, my father, my uncles, and some friends of the family had done military service throughout the 80s and 90s. Although they often emphasized the formative experiences of their service, they didn’t encourage me, but also didn’t talk me out of it. Thus, as someone who wasn’t entirely sure what to study anyway, I didn’t really question the meaning and had no good reason to bypass my civil duty.

In summer 2010, on my 19th birthday, I started my six-month service. In retrospect, I agree with my relative’s assessment: the service was a life-shaping experience. To be fair, I could have done without the obstacle course and getting up at 4:30 a.m., but living together, being trained, and educated with over a hundred different young men from all over Germany, with diverse backgrounds, attitudes, values, and religious beliefs broadened my horizon and got me out of my sheltered bubble. Sharing a small room with three strangers (who then became comrades and friends), was not always comfortable, but it was good for learning consideration and the ability to compromise.

After six months I left the Bundeswehr and entered academia to study history and political science. In seminars and discussions with fellow students I noticed a lot of ignorance and judgment regarding the Bundeswehr and the military in general. Often, opinions were not based on actual knowledge or experience, but on perceptions and prejudices. Given Germany’s history, and the key role of the military in the crimes of the Nazi era, it is understandable that the German population is much more skeptical of their military than people in other countries. In postwar Germany, for a long time, questions regarding the tradition, role, and responsibilities of the Bundeswehr in society were avoided and not really discussed. Sometimes, this put the Bundeswehr as an institution and the soldiers serving in a difficult position. On the one hand, the Bundeswehr is embedded in Germany’s constitution and is a crucial part of Germany’s international alliances. On the other hand, the meaning of their work and service is seldom particularly appreciated.

When I told someone about my military service, the response was often marked by surprise and incomprehension: “Oh, why did you do that?” or “Oh, you didn’t seem like someone doing that.” On an academic fieldtrip to an army camp, some students refused to talk to the soldiers, although they had always claimed tolerance and dialogue as important values. Having all that in mind, I usually kept a low profile about my (admittedly short) experience to avoid having to justify myself or being prejudged. At the same time, it became clear how important dialogue and encounter are, as well as having someone who is able to communicate between both realities, the civilian and the military. Thus, I decided to make an effort and become a reserve officer alongside my master’s degree course.

Being an active reserve soldier means serving for a specific time (ranging from just a few days to even weeks) throughout the year alongside civilian life. During periods of service, I wear the regular uniform and have a military rank. Generally, the associated deployment unit is reasonably matched with the civilian profession and abilities of the reserve soldier. Thus, after finishing the reserve officer training in 2019 (and, around the same time, starting my PhD about antisemitism at universities in Germany), I was assigned to work as a lecturer at the Bundeswehr Command and Staff College in Hamburg. There, I teach German and international officers in history, political science, and antisemitism research a few times a year.

As a lecturer, I learned about the military as a very structured workplace. Not only do classes usually start early (and right on time), but officers are also highly motivated. They adhere to rules and guidelines and have a strong sense of duty. Assignments are done conscientiously and presentations delivered with good rhetorical skill. Being taught by a comparatively young lecturer, without significant military experience, who is also subordinate in rank in comparison to his students, is an uncommon experience for the officers. But, speaking for myself, even just wearing the uniform occasionally, I always feel accepted, and my views are valued and respected. I also profit from the officers’ well thought-out contributions and practically orientated approaches. Questions and remarks are often straight to the point: in a seminar about antisemitism and the Covid pandemic, an officer asked about specific measures he could take to prevent antisemitism and conspiracy myths among his subordinates. For over an hour, we discussed different measures such as political education, encounters, as well as the point of punishment, if there is one. In another course, I covered the antisemitic narratives being put forward by Putin and Lavrov during Russia’s war in Ukraine. The German military should be particularly sensible and capable of recognizing those.

Generally, I found the soldiers I’m working with to be very open-minded towards new perspectives and approaches from outside their military milieu. But sometimes I can perceive a feeling of discontent or lack of understanding among the officers as well. Often, they feel that in society and especially in academia their views and perspectives are not always heard and included. On the one hand, academic debates are often perceived as being detached from practical military work and some sort of luxury problem. On the other hand, I have experienced how soldiers appreciate being challenged by thoughts and inputs from outside their ordinary milieu and routine. Thus, I find myself in an interesting and exciting, but sometimes also challenging middle position between the military and civilian society. As a connector between both sides, I am trying to promote mutual understanding. At the staff college, I try to raise awareness of topics, perspectives, and approaches that are not always heard in the military. In civilian society and the academic milieu, I promote talking to people from the military rather than about them. Reserve soldiers can have an important function as connectors between both sides who enable dialogue between two very different spheres, the civilian and the military, thus increasing mutual understanding.

All this also applies to many other areas and existing milieus we are all a part of, be they different professions, religions, ethnicities, or other communities. It’s all about having people who are part of different groups promoting and enabling dialogue among them. Often, this doesn’t even take a lot of effort. It can be easily achieved through encounter, a short chat, or an invitation. The only thing needed is tolerance of different opinions and the will to take other perspectives into account. By becoming active and taking part in dialogue, one can watch how prejudices are broken down, which is incredibly satisfactory and enriching. 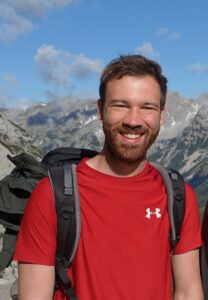 Johannes Sosada participated in the DialoguePerspectives programme year 2021/22. He studied History, Political Sciences, International relations and Peace and Conflict Studies in Göttingen and Tübingen. Currently Johannes is writing his PhD on antisemitism at German universities. He is also an active reserve soldier and a lecturer at the Bundeswehr Command and Staff College in Hamburg.