A flower with many petals

I first enrolled in DialoguePerspectives in 2020, and have been a part of it ever since. What convinced me to apply were the goals that this beautiful community has, mainly those most important to me. The first one is to bring people of all ages, genders, religious beliefs, and cultural backgrounds together to teach us all how to not only understand, but practice acceptance, good listening, empathy and valuing others. The second is to discuss and plan actions to combat discrimination, as there is so much of it going on all over the world, based on people’s many individual characteristics that cannot and should not be changed. What made me not only want to apply but to stay was the community of people that DialoguePerspectives created and the lessons that this community, being a part of it myself, and the activities we did together, have taught me. Being a very diverse community, it also holds a wide diversity of religious beliefs and practices. My experience with it has touched my heart and my perception of this world in meaningful ways.

The most common association I use when I talk about the DialoguePerspectives interreligious community is that of a flower with many petals, of all sizes and shapes, of all colours and growth processes. And what I feel is that we, tiny but strong petals, grow together in acceptance and love. But how could so much diversity be attached to only one stem? How is it possible for so many religious beliefs to co-exist and be shared among so many people? I will try to explain how such (still) rare flowers can grow and how I became a part of one.

Tale as old as time

Throughout my childhood, I mostly had contact with Orthodox Christian communities, for Eastern Orthodoxy is the predominant Christian denomination in Romania. However, attending school and a sports team meant having contact with lots of people. This is how I learned that, although still Christians, some of them called themselves Catholics, others Baptists, others Reformed, and so forth. They told me about their churches, beliefs, and traditions and over time I came to understand the differences between these Christian churches. But above all differences, we shared two things: our faith in a better world, and our friendship. We became friends because we wanted to play together and laugh as often as possible. We became friends because we helped each other and supported each other and understood that we were a team and that we couldn’t do much or achieve anything by ourselves. Helping each other led to use trusting one another. Trusting one another led to a sense of responsibility: we mostly tried to not break that trust, because with time we learned that breaking someone’s trust, somehow breaks oneself too. Above all, we became friends because we wanted to. And we became friends long before we understood our differences in faith, so that even when these differences showed up, they did not erase all the reasons why we became friends in the first place. Being a part of a different church didn’t make friends less kind, less trustworthy, less willing to help me and others in need. And I was in my late teenage years when I understood that, in Christianity, no matter the branch, there are teachings we all agree on: love one another, be kind to each other, help those in need, forgive those who trespass against us.

How about finding out that Christianity is not the only religion that celebrates love, kindness, compassion, and forgiveness? Especially nowadays, with people all over the world advocating and acting in the hopes of bringing more of these values to the surface, different religious orientations – such as Judaism, Islam, Christianity, or atheism – come together and differ no more when it comes to bringing good and light into the world. I was taken by surprise with how at home I felt with DialoguePerspectives, how my beliefs when it comes to values of mine were only enriched by the people I met, whether they were Muslim, atheists, or Christians or not affiliated with any religion. We respectfully attended the ecumenical service that Christian participants organised. We listened in silence when Muslim participants prayed. And we celebrated Shabbat together, a celebration of gratitude and peace.

I felt safe and supported in my faith. I felt at peace while praying for peace alongside others, each of us in our own language and religious habits. Holding their hands, I started to see us growing and blooming into this beautiful flower that I did know could grow. With the stem that transfers all that is good that the world gives, and we give back in return. With the leaves that contain all we need to survive – love, kindness, compassion, and forgiveness. And with the roots that bring these values from the Earth – with its heroes and kind people asleep underground, with their soaring souls among the stars, with its humans that still walk under the sun, all of them different, yet all of them sharing the same ground. Maybe being together on the same Earth is a sign that we are meant to be united. And no certain religion, and no religion at all, is needed when it comes to choosing love over hate, kindness over malice, acceptance over rejection. We all know that love and happiness make us feel much better than hate and sorrow. For some reason, it’s in our human nature to look for what makes us feel good. And if love is one thing we are looking for – and it is only love that has saved our world, our families, and future so far – then love must be stronger than hate, the desire to love stronger than the desire to hurt. As long as we all seek to do good, it’s safe to say that we have the same religion. I will name it ‘love’.

I often ask myself: what do I need to do for me, and what do I need to do for others? If me, myself, and I need to be an Orthodox Christian, then I am. The world on the other hand doesn’t need my religion, but rather my love, my care, my kindness; it needs an improved version of myself. In DialoguePerspectives I can see plainly how I am becoming this better version of myself that I’ve been longing for – more loving, more kind – when surrounded by people who are loving and kind themselves, regardless of their beliefs and worldviews. Because, if I had to reduce the whole Bible and Christianity to one single word and commandment it would be: love. And if we were to reduce all the laws in this world to only one, rightful law, it will still be love.

If we open our hearts, I believe we can all be united in diversity. Rather than counting the differences, we could count the blessings that different people bring into our lives, that we can bring into this world together. For me, DialoguePerspectives is a blessing, a flower that brings hope and happiness wherever it is planted. Earth is nature, and if there is a heaven beyond the sky, it is a garden, and we are a part of it all.

I shall end my story here, but my heart and well-wishes are with you all! 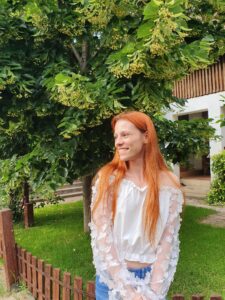 My name is Dacina and I am a Romanian woman. I am a graduate of the Babeș – Bolyai University in Cluj-Napoca, being licensed as a clinical psychologist. I am completing my master’s degree in psychotherapy and counselling, in the hopes of helping as many people as possible to take good care of their mental health and live a joyous, fulfilling life.