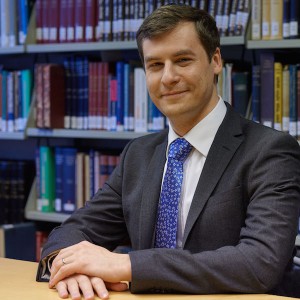 Alexander Grodensky was born in 1983 in Tajikistan’s capital Dushanbe and grew up in northern Russia. He first completed graduate degrees in Public Administration in St. Petersburg and then in Management in Vienna. Before beginning his rabbinical training, he also studied at various Yeshivot in Russia and Israel and was a Fellow at Paideia – The European Institute for Jewish Studies in Stockholm. In 2015 Grodensky graduated with Master of Arts in Jewish Studies from the University of Potsdam and received his rabbinical ordination through Abraham Geiger College. Since then he has been the liberal rabbi for the Grand Duchy of Luxembourg; from 2017 to the end of 2019 he was in charge of the Jewish Liberal Community in the Kassel Region (Germany). Grodensky has also accompanied the program Dialogue Perspectives. Discussing Religions and Worldviews since its launch in autumn 2015, first as Clergy in Residence and later as Rabbinic Advisor. He is a member the European Rabbinic Assembly and of the General Rabbinical Conference of Germany (ARK). He is married and lives with his husband in Luxembourg.