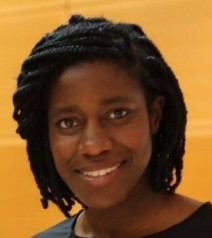 Karen Taylor is the Chair of ENAR (European Network against racism). ENAR is the only pan-European network combining racial equality advocacy with building a strong network of anti-racist organisations across Europe. At EOTO (Each One Teach One e.V.), a Black led community organization for empowerment of People of African Descent in Germany, Karen serves as the director of policy and advocacy. She is simultaneously working as a policy advisor at the German Bundestag where she concentrates on anti-discrimination policies in Germany as well as on human rights issues in West Africa. Throughout Karen’s professional career and voluntary work, it has always been her goal to fight racial discrimination and to provide equal access to political decision-making processes for the most marginalized groups in Germany. As former Chair of the committee for migration and diversity of the Social Democratic Party (SPD) in Berlin, Karen promoted the concept of intersectionality and inclusion within the party and the government of Berlin. She was the first Black woman to hold this position. Karen is an Alumnae of the Transatlantic Inclusion Leaders Network (TILN) organized by the German Marshall Fund (GMF).