A Dossier by CPPD-Member Prasanna Oommen 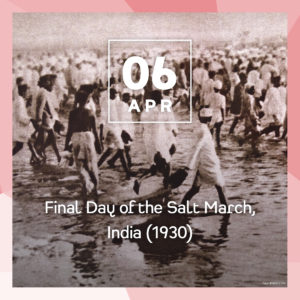 During the British occupation of India, the colonial Government established a monopoly on the production and distribution of salt. As a result, most Indians couldn’t afford the expensive, heavily taxed product.

Which seems like a paradigmatic, but relatively minor colonial crime at first, turned into one of the most prominent steps toward Indian independence and the decolonization of the subcontinent: The Salt March.

In early 1930 Mohandas K. Gandhi set out on a demonstration against the salt tax by marching through what is now the western Indian state of Gujarat. Starting on the 12th of March with only a dozen followers, the protest grew with each town Ghandi and his peers passed during their journey, until he and now about 50,000 Followers arrived at the coastal town of Dandi. There, the protestors collected handfuls of salt along the seashore, symbolically breaking the British Monopoly on salt-production and the laws protecting it. For the next two months, they urged other Indians to break the salt laws by committing similar acts of peaceful resistance against the British Government.

Even though the campaign led to hundreds of arrests (including Ghandis), it turned out to be one of the most successful steps in the fight against the British reign over India and a fine example of the underlying philosophy of satyagraha, which centers on nonviolent resistance to evil through civil disobedience and still inspires civil right movements all over the world.

Mahatma Gandhi prepared the ground for the world’s largest democracy with civil disobedience. In order to empower and perpetuate the good practices of civil disobedience today as well as in the future, one can start at many points. I will try it here: The range of our humanities and arts subjects in schools and universities should passionately convey to future generations, why civil disobedience, political efficacy, solidarity with the vulnerable and a just global economy are worthwhile tools and targets. They must be the lobbyists for a plu-ralistic Culture of remembrance/Erinnerungskultur. Because this is the only way that today’s democracies can credibly communicate that they serve everyone.