A Dossier by CPPD-Member Benjamin Fischer 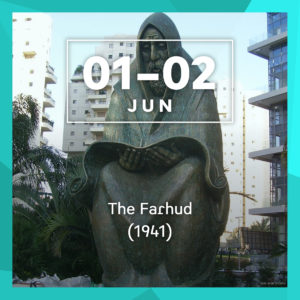 The oldest Jewish community outside of today’s state of Israel was in Iraq, dating back to 586 BC, from the time of Babylonian captivity. Both, Jewish history cannot be told without mentioning Iraq, and Iraqi history cannot be understood without mentioning the Jews. Yet, we must speak of the Iraqi Jewish community using past tense, because the only people capable of keeping this ancient liturgy, the rich culture of Iraqi Judaism alive, have left the country decades ago. A most significant break of Jewish-Iraqi self-understanding occurred on June 1-2, 1941. What would later be referred to as  »The Farhud« (Arabic. For »violent dispossession«) was a pogrom carried out against the Jews of Baghdad during the holiday of Shavuot, following the collapse of the Iraqi pro-Nazi government.

At that time, approximately 135,000 Jews lived in the country which made up almost 3% of the population, with 90,000 in Baghdad, 10,000 in Basra, and the remainder scattered throughout many small towns and villages. With the establishment of the Iraqi state under British mandate in 1921, Jews for the first time received full voting rights and their status as full citizens remained unchanged even after Iraqi independence in 1932. Together with high ranked army officers and with the support of the Mufti of Jerusalem, Rashid Ali al-Kailani formed a pro-Nazi government in April 1941, believing that an axis victory could lead to full Iraqi independence. As the British retook Iraq, they preferred Iraqi troops to first enter conquered Baghdad, where Jews – believing in change after the defeat of the pro-Nazi government – celebrated the Jewish harvest festival of Shavuot. Riots broke out targeting the Jewish community with almost 200 killed, more than 600 injured, looting and rape in the streets of Baghdad. This was an unprecedented outbreak of violence against civilians, including women and children that left the community in shock. It marked the beginning of the end of more than two millennia of Jewish presence in the region. In 1951 only a few thousands were left. Some 130,000 Jews were ultimately airlifted from the country to Israel, as part of »operation Ezra and Nehemiah«. Ali al-Kailani went into exile, made sure to visit Sachsenhausen concentration camp and personally Hitler and long after World War II never distanced himself from Nazi ideology. Despite his unsuccessful attempt for a coup in Saudi Arabia in 1958 and the consequential death sentence, he was pardoned and lived on until 1965 in Beirut.

Until today the Farhud serves both as an example for pogroms carried out against Jews during the Holocaust, but also manifests the collective trauma of the entire Iraqi Jewish community and their uprooting. After all, the necessity to remember the Farhud should also be understood as an effort to acknowledge the tragic history of Mizrahi Jews in general.

It would be wrong to paint an entirely romanticized picture of Jewish-Muslim coexistence in Iraq and the MENA-region, but until the exodus of 850,000 Jews from the Arab world in the 1950s, Jewish-Arab identity was hard to oversee in many countries. My own grandparents had to leave Tunisia for Israel in this period and up until their death they spoke about one day coming back to visit Tunis. Their mother tongue was Arabic and despite living in Israel, they would naturally pass it on to their children.

As I am writing this one day before the beginning of June, my newsfeed is dominated with messages of a law passed in today’s Iraq that criminalizes any form of relations with Israel, rendering it punishable by death. Maybe today is a good day to remind ourselves that once there was a large Jewish community in Iraq, as it not only seems to be forgotten, but might never return.