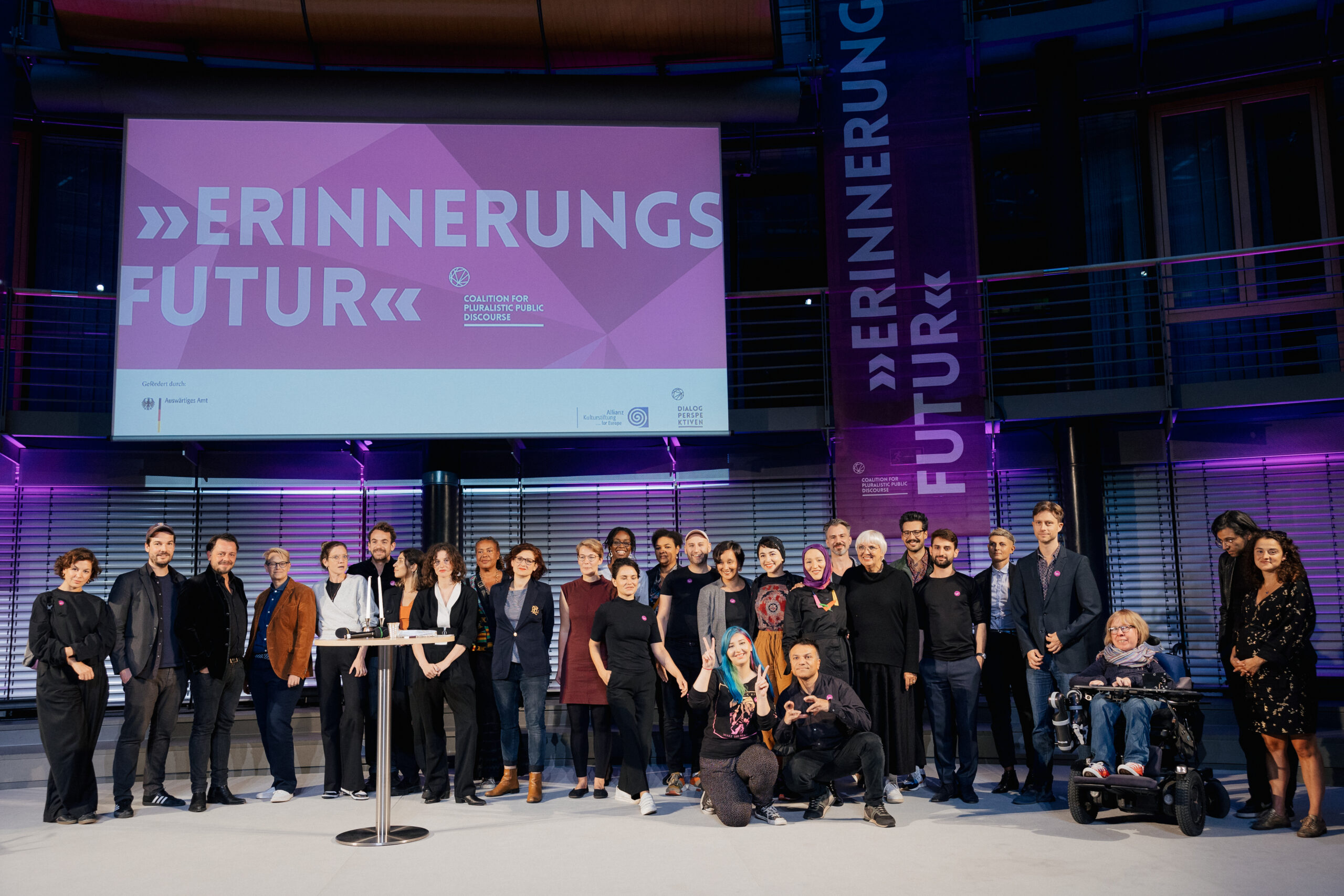 RADICAL DIVERSITY characterises today’s European societies. This has repercussions for their understandings of themselves, ranging from political ideas to forms of public memory and remembrance. Dialogueperspectives. Discussing Religions and Worldviews, an initiative of the Leo Baeck Foundation, seeks to think these cultures of remembrance anew and to develop strategies and visions for pluralistic remembrance. In this pursuit, the programme is bringing together young intellectuals, artists, and academics under the auspices of the Coalition for Pluralistic Public Discourse (CPPD). With Dr. Max Czollek, lyricist and essayist, providing the academic and artistic leadership, and Jo Frank and Johanna Korneli of Dialogueperspectives/Leo Baeck Foundation providing the overall leadership, the CPPD works to provide artistic, civil society, education policy, and didactic concepts and ideas for the pluralisation of European cultures of remembrance.

CULTURES OF REMEMBRANCE ARE POLITICAL. They contain interpretations of history and of the present, visions of the future, and offer identities. Cultures of remembrance make certain groups and their perspectives visible, while excluding other groups and their points of view. For that reason, populists use cultures of remembrance to historically reinforce their visions of the present and the future – from the creation of a Judeo-Christian “West”, to questioning remembrance of the Shoah.

CULTURES OF REMEMBRANCE ARE DYNAMIC. They change over time, with new societal and political constellations. But they especially change along with the bearers of memory and remembrance. Institutions, communities, and individuals contribute to this dynamic. Who remembers when, where, and how, as well as whose remembrance is made visible – i.e., via state support, exhibitions, memorials or days of commemoration – plays a decisive role in determining the story a society tells about itself, about who belongs to its “we”.

COALITION FOR PLURALISTIC PUBLIC DISCOURSE. With the creation of the CPPD, Dialogueperspectives is crafting a coalition of discourse-shaping young people with diverse backgrounds who are all, in a great variety of ways, working on and researching topics relating to pluralistic cultures of remembrance and diversity. At the centre of this work is the conviction that those who seek to understand the present and the future through the lens of the radical diversity of contemporary societies must also tell a new story of the past.

RECOGNITION, VISIBILITY, STRENGTHENING. Pivotal to the development of European cultures of remembrance is recognising, making visible, and strengthening the diversity of European moments of remembrance. We must take seriously the bearers of memory who, with their recollections of flight and expulsion, violence, disenfranchisement, and survival, help to shape European society. That includes both integrating current discourses, such as those on post-colonialism, anti-Semitism, and racism, and including the cultures and practices of remembrance of a range of societal groups and communities such as Sinti and Roma people, LGBTQ people, and disabled people. Without them, it is impossible to strengthen the remembrance and remembering of society at large. The CPPD thus stands for a transition from an identity politics and monoculturally oriented culture of remembrance to a recognition of plural European societies and a diversity of cultures of remembrance.

The coalition started its work in May 2021. Its members meet multiple times for virtual discussions and collaboration through the end of 2022. Also planned are a conference, a book publication, workshops, public discussion events, and the creation of political recommendations and policy papers.

You can find all members of the coalition here. For keeping up to date with the project’s activities visit the news page.