A dossier by CPPD-Member Prasanna Oommen 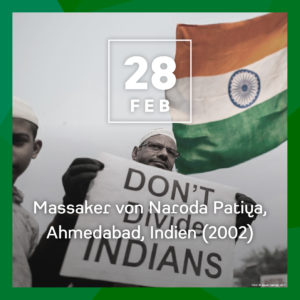 „Where ever we went to seek help, they said you have to die, this is the order from above. My two-month-old nephew was burnt alive… what was his mistake?“ This is how one survi-vor recalls February the 28th 2002, the day of the Naroda Patiya massacre, which saw 97 Muslim inhabitants of the Indian Town of Ahmedabads Naroda neighborhood dead and countless others displaced.

The killings were perpetrated by a mob of 5,000 rioters, led by the right-wing organisation Bajrang Dal and allegedly supported by the Gujarat State Government. They were accompa-nied by an islamophobic media-campaign and a press embargo on critical media outlets, which further delayed a response by authorities. In the ten hours that passed until order could be restored, the mob sexually assaulted, raped and burnt their Muslim neighbours, looted their property and destroyed their places of worship. Survivors were forced to leave for hastily constructed relief camps and many never returned to the place they once called home.

For those who did, remembering the Naroda Patiya massacre is not just Culture of remem-brance/Erinnerungskultur, but part of an ongoing fight for justice: „I was living in Naroda Patiya in 2002 and I still live there. I lost my whole family, my mother, my brother, four in-nocent children. I stayed in Naroda Patiya because we did not want to leave before we get justice.“

This crime against the Muslim minority in a secular democracy should have created an out-cry in the world, but the killing took place beyond the world’s attention. My question is: How much longer? How much longer will genocides and ethnic cleansing be part of our so-called civilized world without particularly affecting the west? How much longer will the currency for visibility and call to action still be white and western? How much longer will globaliza-tion be a marketing buzzword and not used as a compassion accelerator? I believe: A long time! That is why a plural culture of remembrance/Erinnerungskultur, spread across the globe with public attention, is the only way to more visibility and justice.