May 8th/9th: Commemoration in Ukraine 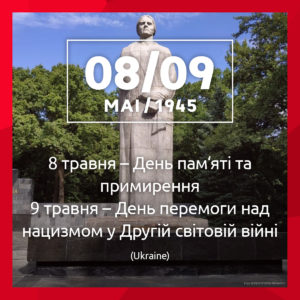 The end of World War II in Europe, marked by Nazi Germany’s »Instrument of Surrender« on May 8th, 1945, began to be celebrated as »Victory Day« by many countries in Western Europe, while in the USSR and later in some post-Soviet countries it was celebrated and continues to be celebrated on May 9th. In the USSR, May 9th began to be widely celebrated at the state level since 1965. At the same time, the term »Great Patriotic War of the Soviet people with fascist invaders« was actively used to denote the German-Soviet war of 1941-1945.

In independent Ukraine, which was declared such in 1991, the celebration of May 9th continued. In the first decades of Ukrainian independence, the celebration of »Victory Day« followed Soviet tradition. There were mass events at the state level, parades, sometimes accompanied by military equipment and marches of war veterans. »Victory Day« was actively used by some political parties to mobilize their electorate, the holidays were held with the appropriate party symbols. Events to commemorate the victims were also held on this day. In general, according to a poll conducted by the Razumkov Center in 2011, »Victory Day« was considered a »Great holiday« for 70% of respondents[i]. At the same time, in the West of Ukraine, due to a number of historical circumstances, the »Victory Day« celebration had less support.

From honoring the heroism of the soldiers to commemorating ordinary people

The events of 2014, namely the annexation of Crimea by Russia and the war in eastern Ukraine caused a shift in emphasis from honoring the heroism of soldiers to commemorate the tragedy of ordinary people and from the Soviet tradition to the European one. In 2015, the celebration of May 8th – the »Day of Remembrance and Reconciliation« (»День пам’яті та примирення«) was launched, while May 9th remained a day off and was renamed »Day of Victory over the Nazis in World War II« (»День перемоги над нацизмом у Другій світовій війні«). The symbol of these commemoration days is the Remembrance poppy and the slogans »1939 – 1945. We honor. We prevail.« and »Never Again«.

Let’s look at the city of Kharkiv, located in eastern Ukraine, near the border with Russia. We can say that with the independence of Ukraine, the aesthetics of the celebration in Kharkiv have changed, but not fundamentally. Official events were led by the city authorities, veterans were honoured etc. In general, for many citizens and city authorities in the post-Soviet period, the celebration took place in the Soviet paradigm. The last »traditional« celebration with party symbols, predominant Soviet symbols took place in Kharkiv in 2013.

In 2014, with the beginning of the Russian-Ukrainian war, the atmosphere at the commemoration events was quite tense. And in the years to come the emphasis would be gradually shifting from the celebration of the heroism of Soviet soldiers to the commemoration of the victims of war. After the beginning of the conflict, of course, the symbolism changed – instead of the banned Saint George’s ribbon, Soviet and Russian symbols, the Remembrance poppy began to be used. Since 2017, there has been no guard of honour during the main celebration at the Glory Memorial, where people use to bring portraits of the dead and hold them up. Which may as well symbolize a shift in emphasis from military towards individual and family memory of the war.

In 2022, due to martial law, May 9th will be a working day for the first time in Kharkiv and all over Ukraine. In previous years, despite the changes in the accents, May 9th was widely celebrated. This year it is impossible. The main venue for the celebrations, the Memorial of Glory, was badly damaged during the Russian massacres that have been going on since the beginning of the full-scale invasion in February. Moreover, the mayor of the city, Ihor Terekhov, publicly urged citizens not to go to the Memorial. He noted: »We will definitely go to the memorial together after the victory and we will definitely pay tribute to those people who defended Ukraine in that distant war against the fascist occupiers and now against the Russians.«[ii]

This year, discussions on the May 8th/9th celebrations in Ukraine are ongoing. Results of this year’s sociological poll of the sociological group “Rating” showed that for 80% of polled Ukrainians May 9th is »Remembrance Day«, and only for 15% it remains »Victory Day«[iii]. Significant changes in memory will take place in the near future, as Russia’s current war against Ukraine makes joint memorial practices impossible.