A Text by CPPD-Member Benjamin Fischer 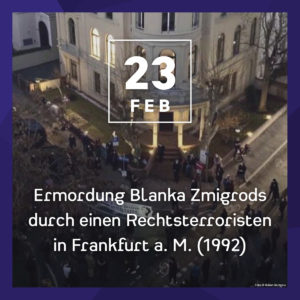 On February 23rd 1992, Blanka Zmigrod was shot in the head from a short distance by a Swedish Neo-Nazi at the crossroad Kettenhofweg/Niedenau in Frankfurt am Main, Germany. Her story and the way it has been commemorated showcases the continuity of right-wing violence in Germany and Europe, the effects of such an act on marginalized groups, and lastly, the significance of finding contemporary means of confronting the past.

Born into a Jewish family in 1924 in Poland, Zmigrod survived four concentration camps – among them Auschwitz. She migrated to Israel after the Shoah, but decided to join other family members and move to Frankfurt’s Westend in 1960 where she set foot, found love and started her businesses. In 1991 she took a job at a restaurant, the same establishment she left the night she was shot. Murdered by John Ausonius who would later be referred to as “Laserman” – a reference to the 11 racist attacks and murders he had carried out in Sweden, using a laser pointed gun. Despite Zmigrod’s identity and the number that was tattooed on her wrist, the court could not find proof of an antisemitic motivation. The perpetrator claimed he had mistakenly believed she had stolen his computer. Two days before, Zmigrod and Ausonius had an argument in said restaurant, when he insulted her based on her Eastern-European accent. Ultimately, he was only extradited to and indicted in Germany in 2017, 2018 he was sentenced to serve life in prison.

Years later, the perpetrator behind the Utoya attacks in 2011 would refer to the Swedish Neo-Nazi Ausonius in his manifesto. Over the years rightwing extremists throughout the continent would wear t-shirts idealizing him and his racist killing spree – long before his trials. The shocking resemblance to what would later be referred to as the NSU-murders in Germany indicate, that his acts served as a blueprint for right-wing terror.

Frankfurt’s Jewish community and Zmigrod’s family only found justice more than 26 years after she was murdered, with little to no room for public grief. That was until in 2020 Ruben Gerczikow a Jewish student activist, started initiatives to commemorate Zmigrod, addressing the community’s trauma and publicly claim justice. A change.org petition gained roughly fourty thousand signatures and a protest march in her memory sheds light on the open wounds of Frankfurt’s Jewish community. Gerczikow started the petition demanding the installment of a plaque in her memory at the crime scene and to gain political attention on the community’s trauma – shedding light on European Nazi-terror against the migrant community and a Holocaust survivor. This, like so many other events would have stayed unmentioned in the public discourse, if it wasn’t for these forms of activism.

To Gerczikow and his fellow activists I therefore pay tribute, to Blanka Zmigrod’s family and the family of every victim of Ausonius’ horrifying murderous rampage I send my sincere condolences. May their memory be a blessing.